Most Used Guitar Pedals To Record An Album 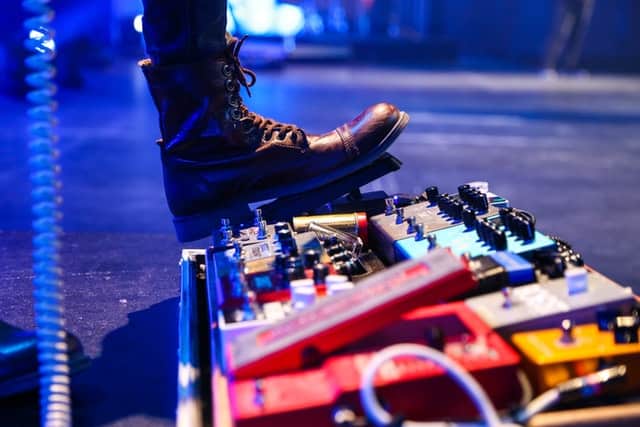 Over the last year and a half, there has been a keen interest in learning to play a new instrument. The pandemic was announced early last year, and what has followed has been a series of restrictions on movement and social activities.

Being required to stay at home for long periods led many to seek out new hobbies and interests. For others though, it was an opportunity to spend more time on an existing interest. For many newbies and experienced hobbyists, the choice was music.

This isn’t just hearsay, the figures speak for themselves. 2020 saw Fender have their best sales year ever. Gibson reported a huge rise in sales. Acoustic and electric guitars have been flying out of the door from retailers such as Sweetwater.

Ukuleles and other instruments are also enjoying a bigger interest from the public as people discover the joys of playing an instrument. It is electric guitars though that fascinate many, and the sounds they can make, especially once connected to amps and effects pedals.

Why are guitars so popular?

Guitars are easily one of the most popular instruments that get sold to beginners. Ideally, someone would probably start on an acoustic version before moving on to an electric one, but many go straight for a Stratocaster.

They are easier to learn than many people believe, as long as time is given to practice. Lessons are available readily from professional teachers, and there are plenty of resources available on the internet.

One other reason that guitars are popular, is that quite frankly, they look cool. You only have to look at the roll-call of famous guitarists to see why many want to emulate their success and their talent.

Many of these guitarists use effects pedals to give them their distinctive sound. Keith Richards used the Maestro FZ-1 Fuzz-Tone when he helped make Satisfaction with the Rolling Stones. This record along with Richards’ unique sound almost single-handedly made the Maestro a major seller.

What is a guitar pedal?

If you are currently enjoying playing an electric guitar and own an amp, then you will be familiar with the sound of your guitar. By using a guitar pedal you can change the normal sound of the instrument. This means that you can improve the general sound quality that your audience hears, or you can make subtle changes to it.

There are many different guitar pedals, and the resulting sound will depend on what features they have, and what you want to use them for. Reverb and overdrive are too common uses for guitar pedals, and you can be subtle with them, or you can go full out My Bloody Valentine and use every effect under the sun, at the same time.

More on Kevin Shields’s love of guitar pedals below, but for now you can look at another type of pedal, the preamp.

There can be some confusion between effects pedals and preamp pedals, and many guitarists find the edges are a little blurry.

They will typically have equalization, gain, and volume controls. Preamps built for bass guitars may overdrive built into them also. Unlike effects pedals, preamps are designed to improve consistency and adjust tones.

While an effects pedal might give you that signature sound you are craving, a high quality preamp pedal is more likely to help you if you already like your own sound, but just want to improve it somewhat.

Preamps offer a way for your sound to remain more consistent when playing in different venues. They can also help if you switch instruments during your show as you won’t need to keep adjusting the amp when you have a pedal to easily get the tone right.

What musicians use guitar pedals?

It probably won’t surprise you to hear that Jimi Hendrix was a big fan of guitar pedals before most other guitarists had got involved.

Some purists look at effects pedals as gimmicks, but you only need to look at the roll call of guitarists who use these devices to realize they have a place with serious musicians.

Guitarists who use or have used effects pedals:

This short list doesn’t even scratch the surface, but it’s not a bad group to be associated with if you like guitar pedals, is it?

It would be difficult to imagine the sound of The White Stripes without the accompanying fuzz. When it comes to musicians such as Johnny Marr, you may have to search through his music to find when he used effects pedals, think of ‘How Soon is Now’, and you’ll be on the right track (no pun intended).

What pedals are most used today?

There is plenty of choice for preamp and effects pedals on the market now, but below are some of the most popular.

Dave Gilmour and Santana are fans of the Big Muff, and there are a number of variations in the series.

As used by the late Kurt Cobain.

If you want to completely change the sound your guitar makes, then this may be the one for you.

A compact delay pedal from a solid brand name.

What effects do these pedals have?

It is perhaps useful to run through what all the different pedals can do, and what you have heard on popular albums and on the radio.

Here below are many of the different pedals and their uses:

There are more than this, but this gives you an idea of just how many ways you can adjust the sound and tone of your guitar playing. There is one musician who likes to put all of these together, or so it seems.

Who loves guitar pedals the most?

When you are thinking of making your own sound, you might want to buy a guitar pedal and set up a DAW. Learning how to create music at home can be a simple affair or very complicated. Kevin Shields would no doubt take the complicated route when it comes to creating his very unique sound.

My Bloody Valentine is known for their literally ear-splitting music, and it is no secret that Shield’s loves guitar pedals.

No matter how much Keith Richards loved the Fuzz-Tone, it is hard to imagine he would ever contemplate a pedalboard like Shields’s. On one pedalboard for the guitarist, there are over thirty different effects pedals. Perhaps no one else in music likes to run so many pedals in unison.

Many famous albums and songs have been created with the use of guitar pedals. They are not a gimmick when used correctly, but can help create signature and unique sounds.

For some musicians, the guitar pedal is a fundamental part of their sound. For others, a quality preamp will do the job as they just need slight tonal adjustment to get the sound they want.

As you can see, many famous guitarists enjoy these pedals so there is no reason not to experiment to make your own sound. Kurt Cobain’s guitar sold for $6 million, so you have to wonder how much his pedals would be worth?