Boy Harsher, the duo of vocalist Jae Matthews and producer Augustus Muller, have announced a new album: The Runner arrives January 21, 2022 via Nude Club/City Slang. The group’s fifth LP following 2019’s Careful will be released alongside a short horror film written, produced, and directed by the duo, also titled The Runner. Today’s announcement comes with the release of of the lead single ‘Tower’, which is you can hear below; check out a trailer for the film and the album’s cover art and tracklist, too.

“We wrote ‘Tower’ several years ago and although it’s evolved over the years, its initial intent remains the same – that feeling of being enveloped, suffocated, entrapped in a relationship, which in turn manifests into reckless attack,” Matthews explained in a press release. “What you love the most can make you into a monster. And that’s what this song is about, being a paralyzed fiend.” 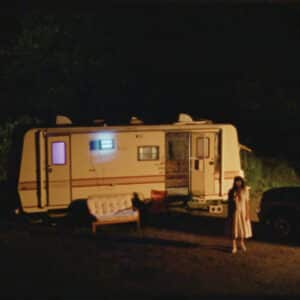