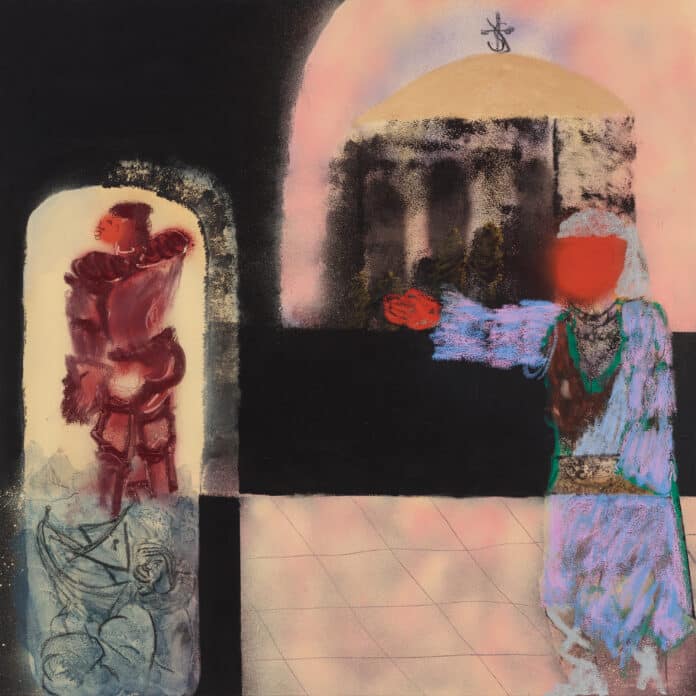 Meg Duffy doesn’t reveal much about the song. It’s the first thing we hear about on Fun House, and whether or not it’s the same one, we hear about it again: first it’s “the song,” then “your,” then “a.” It is, quite naturally, a thing of the past: the thing Duffy attempts to dig into on their third album under the Hand Habits moniker. In press materials, the singer-songwriter compares the act of performing to casting a spell, and what’s so enchanting about the best songs is how they sometimes have a way of not only conjuring memories, but also giving them a better home. In another meta moment, on ‘False Start’, Duffy seems to be referring explicitly to one of their own songs, confronting a careless listener as they sing, “You missed the best part.” This time, it’s more the you that’s hard to grasp: The song feels both abstract and palpably real.

Duffy ensures no one misses the best parts of Fun House by making it their most fully-formed, expansive, and rewarding effort yet. One of its greatest gifts is that it doesn’t go big just for the sake of it: the shift in sound is a natural result of the dynamic Duffy cultivated with the producer Sasami, who was working on engineer Kyle Thomas’s King Tuff album when Duffy moved in with them. Duffy credits Sasami’s vision for pushing them to overcome musical boundaries and find new ways of expressing emotional truths that, as was the case with many of us, had resurfaced during the pandemic. “I think I started getting really angry,” Duffy told The FADER. “And I couldn’t really understand where that anger was coming from.” While previous Hand Habit albums, particularly the spare folk of 2019’s placeholder, seemed inclined to blanket that sense of anguish and unease, here those feelings have the space to unravel and take different shapes, becoming a propulsive force on ‘More Than Love’ and eventually boiling over on ‘Gold/Rust’.

These might be, depending on what you gravitate to, the best moments on record, but the true magic of Fun House is in rich detail Duffy and their collaborators have weaved into the songs. On the gorgeous single ‘Aquamarine’, Sasami’s pulsing synthesizers fill in the space around a voice that can’t quite speak of trauma, but whose words point to its lingering effect: “Why can’t you talk about it?/ I got used to being on the other side of the truth.” The song is about turning over a box of items that belonged to their late mother, but Duffy revisits these memories not as a means of documenting pain, or even attempting to heal it, but as vital step in the process self-care. When they whisper through flickers of the past on ‘Just to Hear You’, it’s all internal and almost inaudible, covered in ripples of guitar and synth that have a nourishing shine to them. It’s clear Duffy is approaching these experiences not through a wary distance but with a calm fortitude, a perspective that allows for movement and discovery without drowning out the songs’ emotional intensity.

It also amplifies the qualities that marked Hand Habits’ music in the past – its remarkable patience and tender beauty – making Fun House sound less like a departure than a homecoming. It’s why, while the focus in the studio might have been on challenging some of Duffy’s musical proclivities, everyone involved in the project seems more concerned with how to best accommodate them. Sasami’s hand in the production is certainly felt throughout the album, but her backing vocals on tracks like ‘Concrete & Feathers’ also provide a gentle backdrop for Duffy’s impassioned performance. On ‘No Difference’, it’s the incredible cast of guest vocalists – including Mike Hadreas aka Perfume Genius, Big Thief’s James Krivchenia, Christian Lee Hutson, and Griffin Goldsmith – that elevate the song as they embody the conflict at the core of it. Hadreas, whose 2020 LP Set My Heart on Fire Immediately shares a spiritual connection with Fun House, also sings on ‘Just to Hear You’, lending it a sense of comforting familiarity.

The added layers never feel superfluous or overly literal, but are instead subtly and evocatively implemented, like the strings, courtesy of Elizabeth Baba, that glide and hurtle through ‘The Answer’. The use of drums in particular is one of the album’s strong suits, not least because of how they vary throughout, from Joo-Joo Ashworth’s liquid percussion on the opening set of songs, to Goldsmith’s swirling drums on ‘Gold/Rust’, or the crisp, organic pace Krivchenia keeps on ‘Concrete & Feathers’. The drums Sasami lays out on ‘The Answer’, meanwhile, sound more like a heartbeat than an instrument, accentuating the intimacy of the track.

As an in-demand session musician, Duffy’s most memorable contributions include the slide guitar on the War on Drugs’ ‘Holding On’ and the haunting solo on Weyes Blood’s ‘Seven Words’. Their virtuosity stands out on several songs here, the guitar serving as a kind of guiding presence in their journey – the sweeping solo on ‘More Than Love’ lifts the whole record up in its first few minutes, while the acoustic guitars on closer ‘Control’ ground its self-affirmations in a lush, reassuring backdrop. “I can change, I can change, I can change,” Duffy sings, “But it’s all behind me now.” It’s a strikingly direct sentiment for a record that hangs in the spaces between past and present, truth and metaphor, you and I – one that prefers to evoke rather than address things, the way a song does a memory, or the other way around, again and again till all meaning is lost. But it also knows that sometimes, to stop yourself from rewinding the tape, the trick you have to pull off is just spelling it out.

Album Review: Hand Habits, 'Fun House'Meg Duffy doesn’t reveal much about the song. It’s the first thing we hear about on Fun House, and whether or not it’s the same one, we hear about it again: first it’s “the song,” then “your,” then “a.” It is, quite naturally, a...