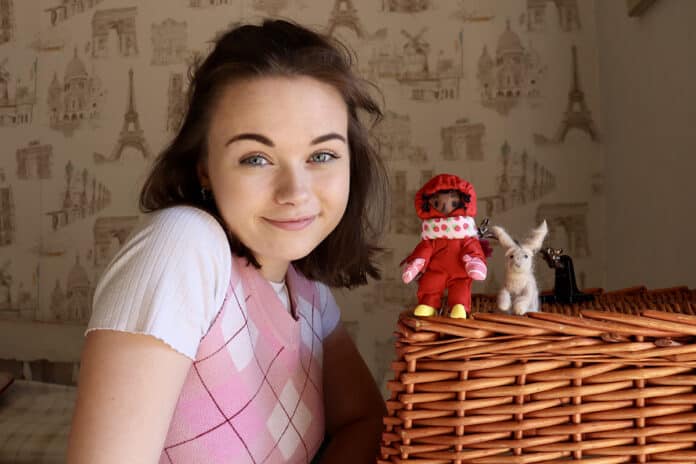 Hannah Lane, an animator and alumni of Cambridge School of Art , recently won the People’s Choice Award at OC Shorts for her film A Snowy Surprise. The film is about a girl who goes exploring in the snow. On her journey, she encounters a furry friend who seems like he may ruin all the fun, but with a heart-warming moment of forgiveness, it seems a friendship is born.

To find out more about the film and her process, we interviewed Hannah.

Hi, how are you and how did you get into film?

Hello there, I am very well thank you and very pleased to be chosen for the People’s Choice Award!

For the longest time I’ve always been into the creative side of things. I am always drawing and making things and I love learning new quirky skills. Around age 13 was when I first tried stop-motion animation, when I realised there was a feature on my camera for it. Having grown up with shows like Wallace and Gromit and Pingu, I was instantly inspired and gave it a go. Later on, when I decided to go to uni, I knew I wanted to pursue a career in animation, but I was nervous. Wasn’t sure if I’d be any good at it. So, I took a joint course of animation and illustration as I knew I could fall back on my drawing if need be. On my animation course I was mainly taught basics in 2D computer animation (which was fun and great skills to have) but I could never get stop-motion out my mind. So finally for my final major project I decided to take a chance because if I didn’t do then, when would I?

What films do you feel influenced your style the most as a filmmaker?

I watched a lot of older animation when growing up (I’m currently 23) including The Magic Roundabout and The Herbs. I wanted my film to have a nostalgic feel for people my age and above but also equally enjoyable for younger generations. Modern films that inspired my film as well would be The Little Prince. An absolutely stunning film with a combination of CGI and stop-motion, a family film for all! And of course, the amazing Wes Anderson Films like Fantastic Mr Fox and Isle of Dogs. I love the way those films feel home-made, for example you can see the smoke is literally cotton wool! It instantly makes the audience connect more with the film, when it feels like you could touch it. It’s what you don’t get with computer animation.

How did the idea for A Snowy Surprise come about?

A Snowy Surprise formed around me thinking about what I wanted to try to animate. As this was my first ever stop-motion short film, which I was making all by myself due to Covid, I didn’t want to make it too hard for myself but I also wanted to give myself a bit of a challenge. I thought of setting the animation in the snow. Why? Because all you just need a white backdrop! Easy, done. The idea then developed around that.
I wanted to make a story that was fun and family-friendly that would put a smile on anyone’s face, of any age. It was also important for me for the film to have a moral at the end that a child could take away from watching it, even if they didn’t realise it. In my case my film shows when to apologise and about forgiveness.

What challenges did you face making the film?

Oh, where to start… This film definitely came with plenty of challenges. Learning to problem solve was key for starting out with stop-motion animation. Every scene came with a conflict I had to overcome and if I wrote about every problem I faced, you’d be reading a 2000-word essay.

But to start, there was of course lockdown that put a spanner in the works. I was meant to be using the stop-motion studio at my university, however the uni closed and I was stuck at home. Therefore, I created this all in the spare room at my house where I built all my own puppets and sets.

In the opening scene you see the little girl (Willow) wipe the frosted window. This was actually done with multiple sheets of tracing paper. Each piece was sized to the window pane and cut in different stages. When swapping the sheets, I had to be very careful not the move the set as it would mess up the shot.

The snow was a big struggle when creating the footprints. This was done with icing sugar, which ended up being extremely messy and sticky! I had to use a rig (a metal support arm) to hold up the puppet when filming the birds eye view shot, however the rig was too short and the base kept messing up my lovely footprints! I ended up attaching the rig to the puppets hand which was out of shot, so I could keep her balanced but not ruin the pattern in the snow.

I had to make a few detachable rabbit arms here and there but one of the biggest challenges I faced was when my puppet’s leg snapped. I only had about 10 scenes left to shoot out of 52 but 3 of those included her walking or standing. Therefore, she had to go through emergency surgery, but with a bit of putty and extra stuffing, she was good as new again.

You’ve got a growing a career in film, what projects do you have planned next?

Right now, I am trying to expand my networks and get my film out there to get some recognition. I am working on a few personal projects, trying to hone my skills in puppet making. At the end of October 2021, I am working on a live-action short-film, helping out with props and costumes. It should be entering into festivals in 2022.

If you could give some advice to aspiring filmmakers looking to get started in film, what would it be?

I know it’s cliche but… follow your dreams! I never would’ve got to where I am with a degree in animation if I didn’t believe in myself and knew I could achieve what I wanted. It is okay to fail, actually, it’s normal to fail. You can’t get something perfect the first time. You just have to learn from your mistakes and you’ll do it differently next time. Follow your heart and what you believe in and you will make it. It’s important to try to keep active creatively and network with other people in the industry, either online or go to festivals/conventions. You can meet lots of inspiring people.

Lastly, if you could work with one director or writer who would it be and why?

There are so many up-and-coming animation directors who are absolutely awesome and I’d love to work with like Anna Mantzaris and Astrid Goldsmith. But if I’d have to pick one, I’d of course have to pick the genius that is Nick Park, creator of Wallace and Gromit. He influenced my childhood and inspired my career from the very beginning. I would be intrigued to just watch him work and see how his ideas come to life.