The Growing Popularity of VR Gaming 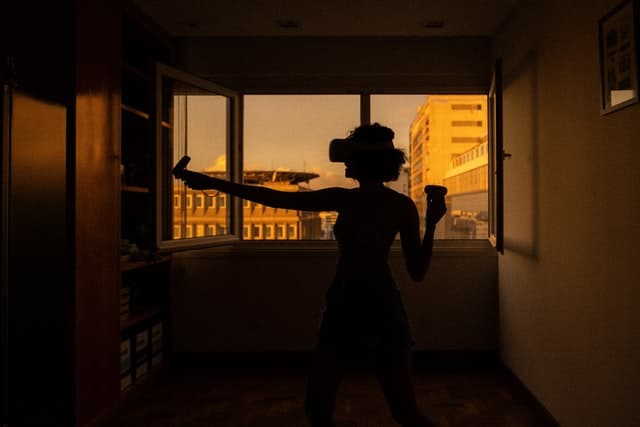 The Rise of VR Gaming

Virtual reality (VR) is a hot topic in gaming these days. Facebook released sixty new games for Oculus Quest this year, and two prominent VR games, namely: Quest 2, and The Walking Dead: Saints and Sinners, made over $10 million in sales this year alone. Sales of the Oculus Quest 2 headset were reportedly five times higher than 2019’s Quest 1headset. It would seem that VR gaming is finally coming in to its own.

What’s Behind the Sudden Growth Spurt?

Why the sudden surge in VR gamers? Arguably, the global pandemic is one of the main factors that has led to more people buying VR headsets and VR games. Global gaming revenue has seen a huge increase over the last 2 years. Social distancing, working from home, and lockdowns have left many people isolated and bored. What better thing to do then than get stuck into a video game, spin a few reels on an online casino game, or step into a virtual reality game that takes you on a wild ride? And now its just as easy to find an online casino real money game as it is to find an exciting VR game that suits your playing style.

Another reason that VR gaming is finally starting to take is off is that the price of VR hardware has reached a point of mainstream affordability. In the early days of VR, only hardcore gamers were willing to spend hundreds of dollars on headsets that were, essentially, works in progress. Most people preferred to wait it out until the first few rounds of headsets had completed their cycles, knowing full well that if they bought an early headset, they would have to buy an upgraded version before their first headset even had a scratch on it.

The trouble with gamers holding out for better, more affordable headsets, is that software companies are then reluctant to invest in creating VR games. With only a few truly excellent games to choose from, gamers were even more reluctant to invest in headsets. It is this ‘chicken and egg’ situation that has kept VR from reaching its full potential for such a ridiculously long time. Luckily, companies like Facebook have been willing and able to take the risk of making the much-needed investment in both games and hardware. And it’s beginning to pay off.

Will VR gaming ever reach the heady heights of popularity enjoyed by video games such as Animal Crossing: New Horizons, or Call of Duty, or Fortnite? It’s not easy to predict. Even though there are more gamers throughout the world than there have ever been before, not all of those gamers relish the idea of stepping out of their comfort zone. And to play a VR game is to step out of a comfortable gaming chair and into an unknow vortex.

The difference between a video game and VR game is a matter of control. With video gaming on a PC, the gamer is bigger than the game. There is a comfortable distance between player and game, and the gamer has absolute control. With VR gaming, the gamer has to actually step into the world of the game. The gamer becomes part of the game, and by doing so the gamer can feel small and out of control. This feeling of smallness can lead to the gamer feeling vulnerable and scared. And the truth is that most gamers play games to escape feeling vulnerable and scared. Is VR, therefore, just a bit too real to be truly enjoyable? And on top of everything else, VR headsets are still renowned for causing the gamer to feel nauseous and dizzy.

A Long Road Ahead

There is no doubt, the rise of VR gaming well under way. Online casinos will soon feature a section of VR casino games, and social simulation games are sure to find their way onto the list of popular VR games. But will VR gaming become as popular as other forms of gaming? There’s probably quite a few more incarnations of headsets to come before VR gaming has a place in every household. However, after a pandemic that has fundamentally changed the way we travel and interact, VR headsets could provide us with a viable alternative to having to ever leave the house again.