Spiritualized have announced their next studio album: Everything Was Beautiful is set for release on February 25 via Bella Union. Today’s announcement comes with the release of the lead single and album opener ‘Always Together With You’, which was originally released as a demo in 2014. Check it out below, and scroll down for the LP’s cover artwork (by Mark Farrow) and full tracklist.

Frontman Jason Pierce (aka J Spaceman) plays 16 different instruments on Everything Was Beautiful, which also features contributions from over 30 musicians and singers, including his daughter Poppy, longtime collaborator John Coxon, and the Whitechapel Bell Foundry.

“There was so much information on it that the slightest move would unbalance it but going around in circles is important to me,” Pierce said of the album in a statement. “Not like you’re spiralling out of control but you’re going around and around and on each revolution, you hold onto the good each time. Sure, you get mistakes as well, but you hold on to some of those too and that’s how you kind of… achieve. Well, you get there.”

Along with the album news, Spiritualized have announced an extensive world tour running from March to May 2022, including a headline show at London’s Roundhouse. Find the full list of dates below.

This year, Spiritualized reissued their first four albums as part of The Spaceman Reissue Program. The band’s last studio album was 2018’s And Nothing Hurt.

Everything Was Beautiful Cover Artwork: 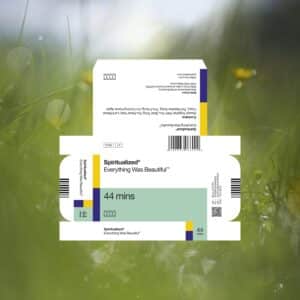 Everything Was Beautiful Tracklist: