Arca has announced yet another new album. Like the accompanying KICK ii and KicK iii, kick iiii will be released on December 3 via XL. Along with the announcement, Arca has shared a new track titled ‘Queer’, which features Planningtorock. Check it out below.

In addition to Planningtorock, kick iiii also features contributions from Garbage’s Shirley Manson, Oliver Coates, and No Bra. Arca said of the new album in a statement:

kick 4 is an entry of sensual charge in the cycle; my own faith made into song, a posthuman celestial sparkle, psychosexual pulsewidth modulation, queering the void, abyss alchemically transmuted into a deconstruction of what is beautiful, it is a healing spell, recognition of the alien inside, a bursting apart of old skin, fresh new sinew rippling outward from a beating core, the first prenatal kick — proof that there is a sentience with a will beyond its creators’ control expressing itself from within the womb

Planningtorock added of their collaboration:

I remember finding “Meditation” back in 2011/12 on Arca’s SC and becoming completely obsessed with the track. Then we finally met a few years later at a festival we both where playing in Krems, Austria and we instantly bonded. I threw my prosthetic nose into the crowd that night and found out later that it was Alejandra who had caught it.
I love her so much and I’m so grateful she exists. The lyrics “Tears of Fire” and “Queer Power” are words I live by and where we connect. So proud to be duetting with her inside this gorgeous epic universe of a track, a queer dream come true 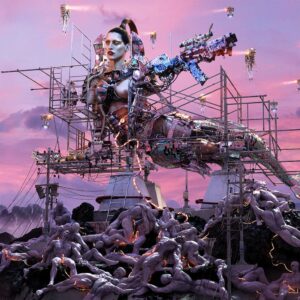