5 Reasons We Love House of Gucci 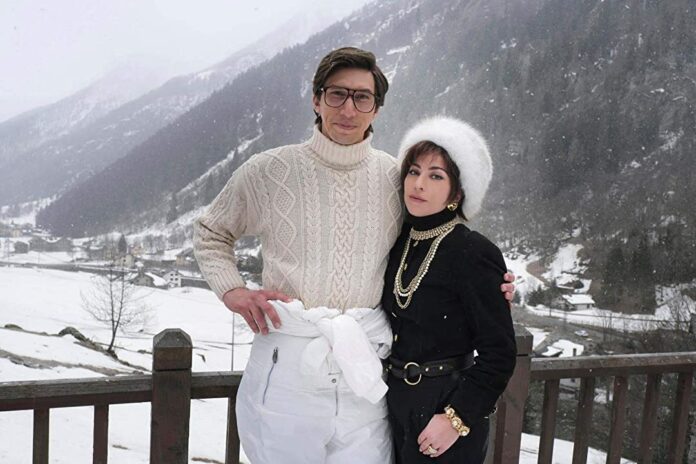 Ridley Scott’s House of Gucci follows Patrizia Reggiani, a meek outsider who marries into the Gucci family. Her unbridled ambition begins to unravel their legacy and initiates a thoughtless spiral of backstabbing, decadence, revenge, and ultimately — murder.

In this article, we’ll look at some of our favourite elements of the film that helped it gain a Golden Globe nomination and three Hollywood Critics Association nominations, including best costume design.

House of Gucci has one of the strongest casts from 2021, which includes Lady Gaga, Adam Driver, Al Pacino, Jeremy Irons, and Jared Leto — to name a few. The show’s star, Lady Gaga, had a superb performance as Patrizia Reggiani, which even earned her a Golden Globe nomination for Best Performance by an Actress in a Motion Picture (Drama). Gaga’s performance is striking and distinct, bringing the film to life with its dramatic familial and eclectic themes.

Alongside her, we also have Adam Driver, who has had superb performances in films such as Marriage Story (2019) and BlacKkKlansman (2018). In the film, Driver plays Maurizio Gucci, the man who was married at one point to Patrizia Reggiani. Whilst it’s not the strongest pull from Adam Driver, it’s an undoubtedly clap-worthy performance that took the film up a notch.

Lastly, the legendary Al Pacino appeared as a supporting actor portraying Aldo Gucci, the eldest son of the founder of Gucci — Guccio Gucci. Al Pacino’s performance was unsurprisingly impressive and even got some approving nods from the critics and film fanatics. Whilst his age is becoming more prominent on the screen, his performances still tick the boxes.

Harry Gregson-Williams, the Primetime Emmy nominated composer, was the film’s unsung hero. With a beautiful pallet of rich and captivating sounds, Gregson-Williams truly helped seize the atmosphere and excitement of one of the biggest films in 2021. With this solid addition to the film, surely it will help it enter the powerhouse class of cinema for 2021 to determine if it is among the top contenders who look poised to win the big awards., with approximate odds compiled according to Offers.Bet.

Visually the film was truly majestic. You couldn’t get enough of the scenic views and well-captured action. Luckily for us, it was captured by the industry-renowned cinematographer Dariusz Wolski whose film credits include The Martian (2015), Crimson Tide (1995) and News of the World (2020) which gained him a worthy Oscar nomination.

For the film, Wolski does a superb job in framing not just people but also objects that help supplement the thrilling storyline of the film. As a result, it’s one of the film’s most vital elements and certainly helps it give it another layer of rush.

Various famous locations were used to shoot the film, including the holiday beloved Lake Como, which has some of the world’s most impressive views illustrating Italy and the dreamlife Gucci represents as a name and brand.

Furthermore, the fashion-heaven city Milan features within the film. The city, which is known for its famous Fashion Week, holds residence to some of the world’s best and innovative fashion designers. Rome, Italy’s capital, featured — a city renowned for its iconic locations, scenery and most importantly, history, something the film honestly takes into consideration due to its subject matter.

The breathtaking views help capture the country’s beauty in which Gucci originated and unravels you into the Gucci family’s life in that period which is like the views we see, seem unreal and far-reached to most of us.

It wouldn’t be a Gucci film without a fabulous costume design selection. As a result, the film rightly received some award nominations for the category, specifically Academy-award winning costume designer Janty Yates who also worked on such films as Gladiator (2000), The Last Duel (2021), and Kingdom of Heaven (2005). Yates truly embodied the Gucci family’s rich, wealthy, and mysterious-like life through her costume design that shined through the cinema screen. In many ways, it is the element that helped shape the vibrant and thrilling side of the film. The costumes are pristine, immaculate and at times seem a little too perfect for the eye. A bit like the expected life of the Gucci family from an outsider view.

The House of Gucci is a must-view for any film fanatic and certainly the fashionistas of our world. Scott’s take on the story is fantastic and is certainly helped by the well-rounded, A level stars. But it wouldn’t be anything worth viewing without the crew, which helped shape the film into a cult classic I feel it will become when it’s more broadly received.