The Pain and Pleasure of Playing Paganini 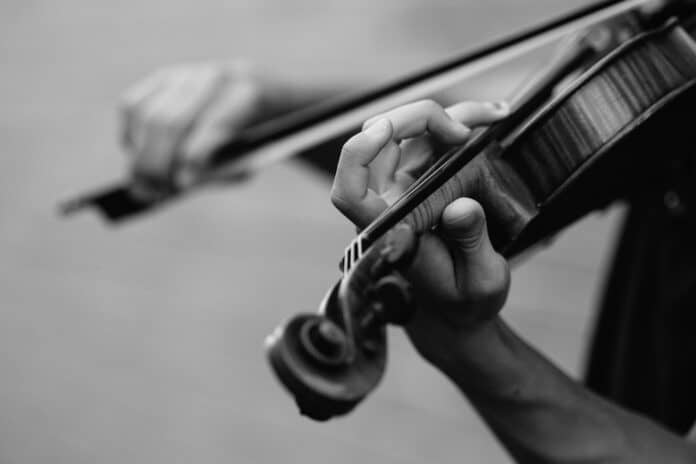 Niccolò Paganini was an Italian violinist and composer in the early 1800s who was celebrated at the time for his modern violin technique; he is still famous today for inspiring many prominent composers over the centuries. His 24 Caprices for Solo Violin Op.1 is probably his best-known composition, involving a fast switching of positions and playing two notes at the same time.

His surname is something of a moniker for challenging music, the benchmark for a difficult composition. “Play us a Paganini”, the crowds will cry. Just ask Asher Laub – he is one of today’s violin virtuosos tasked with playing Paganini as a violinist providing entertainment for corporate events. He also knows a thing or two about playing two notes at the same time.

Asher grew up learning string instruments, much like Paganini and has played concert venues from Madison Square Gardens to Carnegie Hall. He had a successful childhood career as a teenager playing the violin, having learned the instrument years before, when he was still learning to walk. He’s one of a handful of musicians dragging the violin into the ’20s, as the string instrument enjoys a popular resurgence. It’s being featured more prominently in today’s pop music, and its ethereal sound seems to suit our cultural zeitgeist as we look for an escape from the mundanities of living in a post-pandemic world.

Two hundred years ago, in the early 1820s, Paganini was battling it out with French violinist and composer Charles Philippe Lafont, and the German equivalent, Louis Spohr. Whereas nowadays musicians are performing against the backdrop of a pandemic, back then it was war. There is always a challenging political context that gives cultural expression more context. The value of having quality entertainment at corporate events in the current political climate cannot be underestimated for the positive impact it can have on your work culture.

When Paganini was acquiring fame as an Italian violinist touring Europe, he was also garnering a reputation for gambling and womanizing. He would break strings while he was performing as a way to show off his dexterity. He had long fingers too, capable of playing three octaves across four strings in a hand span. Audiences turned to him to lighten the mood of European conflict, back when life was short and war was always imminent.

Asher Laub has his own tricks up his sleeves for impressing today’s audiences. He’s renowned for his iconic electric violin which lights up with blue LED lighting. When you follow in the footsteps of maestros, but you live in the age of social media and mobile phones – it’s not enough that you can play Paganini while providing corporate entertainment nyc.

It’s not enough that you can perform Pachelbel’s Canon as the bride walks down the aisle while also being the Long Island wedding DJ that night. Paganini’s revelry led to him getting syphilis, which he took opium and mercury to deal with. Asher’s revelry involves rocking out with his dancers and band providing interactive entertainment for corporate events – and then going home to upload the event onto social media, or to compose an hour-long Sea of Strings meditation for people to chill out to. He’s got his live audience and his online audience to think about.

Maybe times are tougher – or our longer life expectancy gives us all more time to learn – but it’s not enough these days to just be talented. You have to be hardworking too. Musicians like Asher learn musically from the maestros from a young age, but they then have to take that talent and knowledge with them on the road as they get older, learning to impress corporate event audiences with a mix of the hits and their own original music.

Music entertainment has to compete with sports entertainment, online entertainment – all kinds of entertainment. The days of stadium concerts have taken a backseat since we all started wearing masks, and even some of the world’s most popular musicians are taking up residencies in Las Vegas to make bank.

Being a DJ in Long Island or providing entertainment options for corporate events across America is where the money is for musicians like Asher Laub. It’s also the coalface of change, where social distancing is being measured by the amount people are needing to relax and let their hair down while also wearing masks.

Companies providing corporate entertainment NYC are turning to Asher and his entourage of break dancers and performers to breathe life back into staff morale and remind us how to celebrate. It’s been a tough two years. In turn, Asher is providing something original, something that has the crowds whipping out their phones to record the frenetic violin playing of one of their favorite hits.

It’s all about bringing the violin into the 21st century because gone are the days when entertainment means enjoying a night out at the opera in between wars. People’s attention spans are shorter, and the bar has been raised significantly with regards to what captures our attention and fuels our imagination.

Paganini had it good. He didn’t have to pre-edit his violin package with samples, and then DJ and play the violin live. Asher prides himself on the fact that his team of performers and musicians are happy to play client requests and exceed guests’ expectations on the night.

There’s a lot that goes into keeping New Yorkers (and American audiences) happy: each wedding or celebratory event takes hours of time compiling playlists and finding new ways to wow the audiences. Audiences can also span a wide range of cultural demographics too, so Asher and his team at Fiddlers Dream Productions have made it their specialty catering to Latin, Italian, and Jewish/Israeli musical sub-genres… even Bollywood’s hits have a string section sound!

It’s when an audience member shouts, “Play us a Paganini” that Asher knows his audience is throwing down the gauntlet and know their violin game. And he’s up for the challenge. Since the days of Paganini, violinists have been dueling on stage and Asher has incorporated this into his set. It’s quite something to be entertained, educated, and enthralled – all at the same time.