A new album compiling unreleased material from Sonic Youth recorded between 2000 and 2010 has been announced. The five-track In/Out/In will be released on LP, CD, and cassette on March 18 via Three Lobed. Today’s announcement comes with the release of ‘In & Out’, which you can hear below.

“When you’re in the middle of a tour and all of the musical cylinders (musicians, crew + equipment) are warmed up and firing on 10, and if the room/theater/venue and its acoustics allow, you can sometimes catch magic or maybe a basic track,” Sonic Youth’s Steve Shelley explained in a press release. “This magic/music/inspiration doesn’t always occur when you’d like it to show up (you know, during the show!) -however,  it sometimes can be caught in small unspoken moments during soundcheck when you least expect it.”

“‘In & Out’ was caught in such a situation – during soundcheck in Pomona, CA at the Fox Theatre in 2010 – Kim and I were waiting for our bandmates to arrive and our linechecks turned into a jam session turned into recording a basic track,” Shelley continued. “Recorded surreptitiously by long-time SY engineer Aaron Mullan and tucked away for guitar overdubs later in 2010, and then submitted to Cory Rayborn for his Three Lobed multi-artist box set ‘Not The Space You Know, But Between Them.’ The two SY songs that debuted and were exclusively available on that box set are now available in one standalone collection – In/Out/In  – plus three (mostly) instrumental Sonic Youth jammers from 2000-2010.” 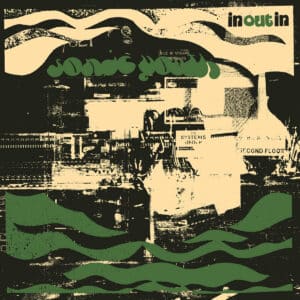