Girlpool – the Los Angeles–based duo of Avery Tucker and Harmony Tividad – have announced their next album. The follow-up to 2019’s What Chaos Is Imaginary is called Forgiveness, and it arrives April 29 via ANTI-. Along with the announcement, Girlpool have shared the new song ‘Lie Love Lullaby’, which comes with an Amalia Irons–directed video. Check it out below and scroll down for the album artwork and full tracklist.

“‘Lie Love Lullaby’ is a song about a time where I felt that my innocence affected my ability to choose a person who was good for me,” Tucker explained in a statement. “In the past, it’s been painful to choose somebody that didn’t believe in me, and I think the most painful part was that I allowed myself to pick a person that didn’t recognize my entirety. I wrote this song wondering, did I recognize it myself? If I had the wherewithal to tolerate their minimizing perspective?”

Girlpool collaborated with producer Yves Rothman on the new LP to achieve an “intersection of Hollywood futurism and post-grunge sincerity,” as a press release puts it. “A lot of my songs on this record are about relationship dynamics where I experienced frustration and pain, and struggling to hold a lot of complexity in my emotions,” Tucker said. “Writing Forgiveness helped me fit all those pieces into an acceptance: that my fate pushes me exactly where I need to go.” Tividad added: “A lot of life feels like unavoidable experiences to me. To me, Forgiveness is about accepting that concept. It’s about forgiving reality for having to be exactly what it is all the time.”

Back in December, Girlpool unveiled the album single ‘Faultline’, which made our Best New Songs list. 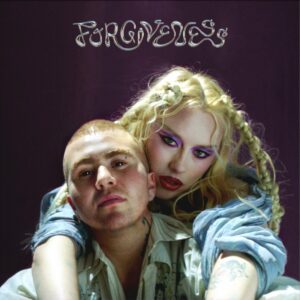