Hatchie has announced a new album called Giving the World Away, which is slated for release on April 22 via Secretly Canadian. Today’s announcement comes with the release of the lead single ‘Quicksand’, which was co-written with Olivia Rodrigo collaborator Dan Nigro and produced by Jorge Elbrecht. Check out its Nathan Castiel–directed video below, and scroll down to find the album cover and tracklist.

Giving the World Away will follow Hatchie’s 2019 album Keepsake. “There’s more to me than just writing songs about being in love or being heartbroken – there’s a bigger picture than that,” Harriette Pilbeam explained in a statement. “This album really just feels like the beginning to me, and scratching the surface – and even though it’s my third release as Hatchie, I feel like I’m rebooting from scratch.”

Commenting on the new song, Pilbeam said: “’Quicksand’ is about dealing with the realisation that you’ll never be satisfied. I started writing it when I was home between tours in 2019 before finishing it with Joe Agius and Dan Nigro the next year. I was feeling guilty and ungrateful for not being happy about a few different things in my life that were technically going well. I had to work through some tough learned thought processes and emotions that had been working away for years to try to understand how to be happy with my present, and stop fixating on my past and future. The video digs deeper into showing this juxtaposition of such sadness and anger despite being surrounded by glamour and grandeur.”

Nathan Castiel added: “For ‘Quicksand’, I created a video that plays off of some tropes of Hollywood glamour in a melancholy and surreal way while giving Harriette room to perform and express the song’s raw emotions. We leaned into a neon-tinged after hours aesthetic and shot on 16mm which added a griminess to the opulent locations and set pieces.”

Giving the World Away was previewed in September with the single ‘This Enchanted’, one of our Best New Songs.

Giving the World Away Cover Artwork: 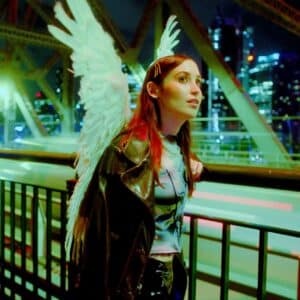 Giving the World Away Tracklist: