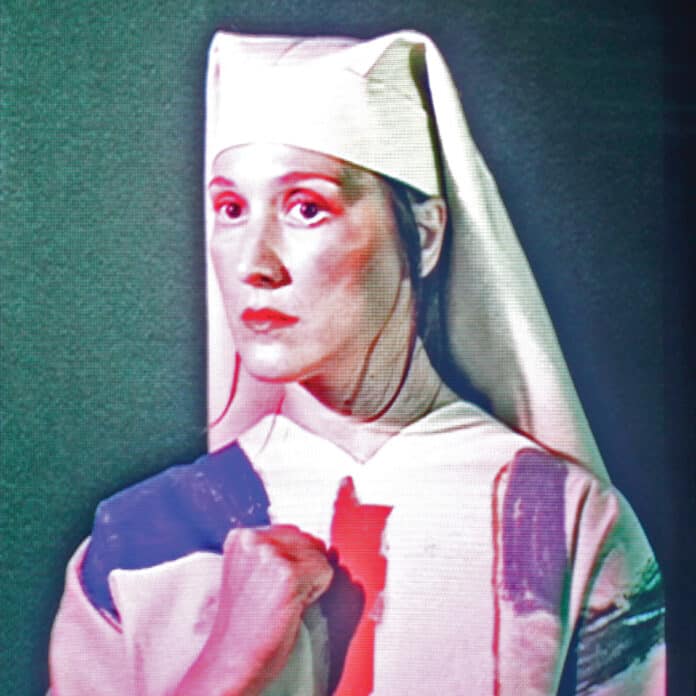 To the human mind, darkness is identified for its potential to enforce limitations upon the body and self. Rebecca Solnit challenges this assumption in her essay on Virginia Woolf, arguing that artists must “go into the dark with their eyes open”; to embrace the uncertainty of the unknown and see through the fear and false sense of truth that it incites. The Welsh art-pop artist Cate Le Bon has cited this essay when discussing her sixth solo album, Pompeii, but the way she engages with its ideas is more than purely academic or philosophical. Paraphrasing her favorite line from it, Le Bon has said the dark people are afraid of is “the same dark in which people make love in.” Though it might be an insignificant and unintentional distinction from the phrasing of the original quote – “in which love is made” – her use of the active voice is in line with her vivid and urgent approach to songwriting as a tool of boundless imagination. Despite its apocalyptic title, Pompeii is full of wonder, depth, and passion, drawing from the tradition of surrealism to come up with something both disorienting and enchanting.

In fact, it is precisely the threat of total annihilation that led her in this direction, free to deconstruct notions around identity, art, and religion. “Every fear that I have/ I send it to Pompeii,” she sings on the title track, which makes no effort to dramatize either the personal or historical narrative that pervades it. Its presentation is stately and meticulous, building on the hallucinatory style that ran through 2019’s excellent Reward, but imbued with a new and intriguing sense of purpose. If that album revolved around loneliness, Pompeii explores the liberating possibilities of isolation; Le Bon wrote it primarily on bass in an “uninterrupted vacuum” before recording it largely by herself with longtime collaborator Samur Khouja in Cardiff, giving herself permission to “annihilate identity.” A semblance of herself still echoes through the album: Le Bon sought to mimic the “religious” sensibility of a painting by Tim Presley, recreating it as the cover artwork and using it as a compass for its sonic palette.

In less capable hands, the result might have been frustratingly anonymous and lacking in resonance. But Le Bon strikes a delicate balance throughout the record, which is accessible and propulsive yet multi-layered and inscrutable by nature. Its fusion of pop and psychedelia makes her sound untethered from time and space, but as an artist she has a knack for precision and dimensionality that many others operating in this lane tend to disregard. Lyrical revelations come in small fragments, and although their meaning remains ambiguous, Le Bon holds the listener’s attention by focusing on how the elements of a song interact in the context of the album. “In the remake of my life/ I moved in straight lines/ My hair was beautiful,” she sings on ‘Remembering Me’, but the unruliness of the track evokes the horror that lies in restructuring a version of yourself through memory. And although she continues to cultivate her gift for oblique imagery and heady soundscapes, that is only one part of what gives the record is character. While the tone of her voice oscillates between cool, melancholy, and playful, her bass lines are the animating force behind a lot of the songs, intermingling with wistful saxophones and Stella Mozgawa’s unwavering drums.

That’s the other thing about darkness – it’s where things come together and can become transformed. There’s no apparent release in Pompeii, but Le Bon revels in the fluidity and physicality of stretching yourself beyond the bounds of the ordinary, realizing the surprising pleasures that lurk in the emptiest of places. On the album’s most direct and memorable moments – the opulent rush of ‘Moderation’, the dazzling ‘French Boys’ – the fruit of that labour is abundantly evident. “Sound doesn’t go away/ In habitual silence/ It reinvents the surface/ Of everything you touch,” she theorizes on opener ‘Dirt on the Bed’, and you could say the same about happens to identity in the face of destruction, or even something as simple – and at this time, familiar to everyone – as a pause. “This self having shed its attachments was free for the strangest adventures,” Woolf wrote in To the Lighthouse. “When life sank down for a moment, the range of experience seemed limitless…. Beneath it is all dark, it is all spreading, it is unfathomably deep.” Answering in her own way, Le Bon reaches toward expression: “All my life in a sentiment.”

Album Review: Cate Le Bon, 'Pompeii'To the human mind, darkness is identified for its potential to enforce limitations upon the body and self. Rebecca Solnit challenges this assumption in her essay on Virginia Woolf, arguing that artists must “go into the dark with their eyes open”; to embrace the...