Everything Everything have announced their next album: Raw Data Feel arrives on May 20. The band have also shared a new single, ‘Bad Friday’, alongside an accompanying video. Check it out below and scroll down for the LP’s cover art and tracklist.

“This song is about being a victim of violence, explaining it away through the gauze of a ‘crazy night out’,” frontman Jonathan Higgs said of ‘Bad Friday’ in a statement. “We wanted the video to have a monochrome Ink Spots classicism to it, disrupted by elements of A.I.-generated imagery. This reflects the approach to writing and producing the song – the minimalistic combined with the surreal and disorientating.”

The band used an A.I. programme to make some of songs on Raw Data Feel, feeding information such as “the entire terms and conditions of LinkedIn, the ancient epic poem Beowulf, 400,000 4Chan forum posts and the teachings of Confucius – into A.I. automation processes and using its responses as a basis for the record’s lyrics, song titles and artwork creation.”

In addition to the album, Everything Everything are releasing a new limited-edition lyric and photo book titled CAPS LOCK ON: Lyrics + Debris 2007-2022, on May 20 via Faber Music. A press release describes it as “a full-colour, hardback edition presenting the lyrics to all songs released by the band including b-sides, rarities and new album Raw Data Feel. It will present a treasure trove of previously unseen images featured alongside the lyrics, including behind-the-scenes archive material of notebooks, chord sheets, set lists and photos.” 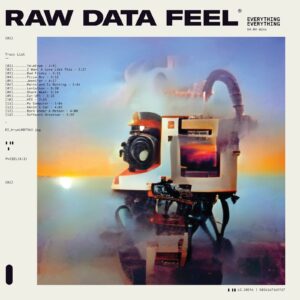