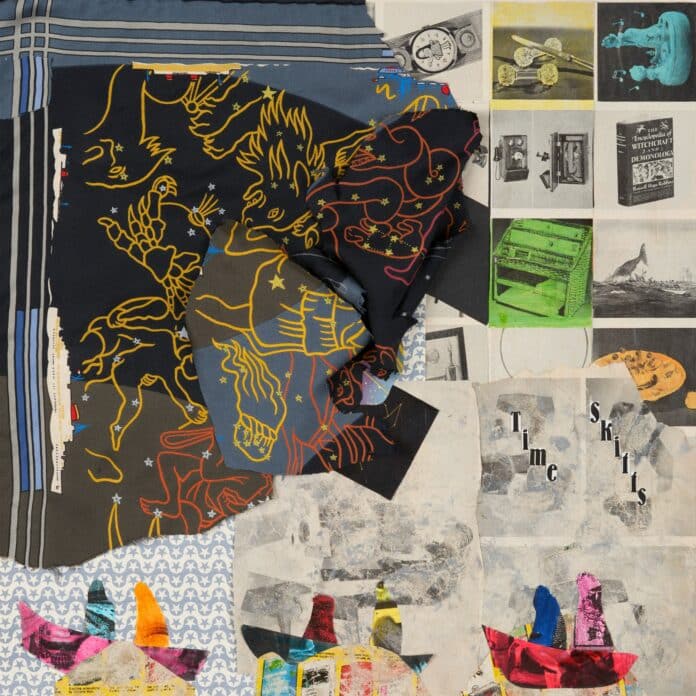 For twenty-two years, the beloved quartet Animal Collective (though sometimes as only a trio or duo) have made songs about wonder: vibrant fantasies built on dream logic. It’s music of wide-eyed affection, wrapped in intricate psychedelic textures. The songs are usually about little things, like fruit or grass, and composed with a childlike synthesis of playfulness and sincerity. Though each of their albums is dramatically different from the last, all of Animal Collective’s music centers around a devotion to dreams and wonder. Yet what happens when the dreamers grow older? And what happens when they come to terms with the anthropocene: nature stripped of its once transcendental power, now at the mercy of humankind? Time Skiffs, the latest record from a now middle-aged Animal Collective, is a work about reaching this acceptance through tenderness, rather than surrendering to bitterness. Though the group sounds older and more grounded than ever, there’s no shred of disenchantment.

Each prior Animal Collective album emerged as a singular vision: not always successful, but undeniably ambitious. Many of the albums grew from a clear conceptual framework. Strawberry Jam, for instance, was born from vocalist and drummer Panda Bear’s question: what if we made an album that sounds how strawberry jam looks? On Feels, their greatest and most dynamic record, the guitars were all tuned to the out-of-tune pitches of an old grand piano, providing a uniformly off-pitch sound. Time Skiffs, however, is largely devoid of gimmickry. These are laidback songs: still unique, yet confident enough in their songwriting to flow at their own pace. In other words, they have nothing to prove.

While Animal Collective’s music often wrestles between poles of ethereal softness and grand catharsis, Time Skiffs is notably subdued. A complete 180 from the summery pop tunes of 2016’s Painting With (an album as lush as it was grating), Time Skiffs focuses on how its songs build and fizzle out. Undeniably, there’s a certain redundancy to their structure. Most songs, especially the longer ones, begin with patterings of sound which slowly morph into controlled pop production with infectious melodies, and then peter out into an ambient decay. Slowness is at the foundation of Time Skiffs. Little is abrupt; almost everything is gradual. However, that’s not to imply the album is devoid of a pulse. Early tracks like ‘Prestor John’ or ‘Strung with Everything’ are lively tunes, embellished with Animal Collective’s signature harmonies, Panda Bear’s dynamic drumming, and, in the case of ‘Prestor John’, even a hurdy-gurdy solo. Yet the progressions in these songs are slow and content to let musical phrases repeat and grow familiar.

This new, subdued Animal Collective sound is poignant because it embodies the ethos of our era. Time Skiffs is replete with questions of existential uncertainty. “How are we doin’ now?” and “how are we gonna know?” Panda Bear sings on ‘Car Keys’—lines written ostensibly about a stolen set of keys that also speak to a universal uncertainty. Like their audiovisual album Tangerine Reef, Time Skiffs gestures towards a harrowing future brought on by the ravages of climate change. ‘Dragon Slayer’, the opening track, even describes a blazing inferno and its relationship to a surrounding ecosystem of water and avian life. Though the album is never depressing, it’s also never as rapturous as Animal Collective’s music once was. Instead, it makes a claim for calmness and compassion in the face of disaster.

Not everything on Time Skiffs works. ‘We Go Back’ is a noisier foray into a jumbled sound that the rest of Time Skiffs avoids. The song’s individual sounds (including autotuned vocals, a rarity for the group) are compelling tidbits with potential, but they never truly interact with each other. ‘We Go Back’ is disconnected and jarring amidst the rest of the album’s coherence. Contrastingly, the final song, ‘Royal and Desire’, is as mellow as the album gets. It’s soft and swaying, yet disappointingly dry in composition and production, especially compared to the idiosyncratic embellishments which bless the rest of album. Yet even with its inconsistencies, Time Skiffs is a fascinating evolution of a band that always moves forward, no matter how uncertain the future becomes.

Album Review: Animal Collective, 'Time Skiffs'For twenty-two years, the beloved quartet Animal Collective (though sometimes as only a trio or duo) have made songs about wonder: vibrant fantasies built on dream logic. It’s music of wide-eyed affection, wrapped in intricate psychedelic textures. The songs are usually about little things,...