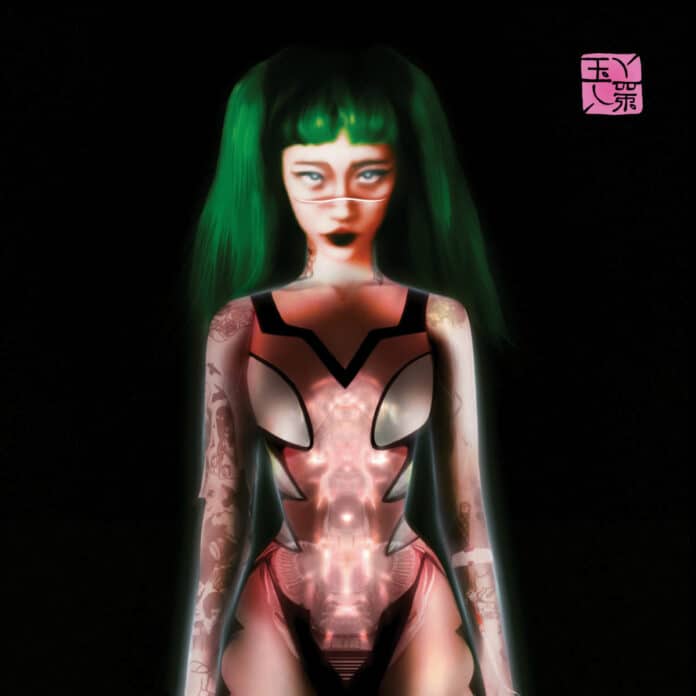 Nat Ćmiel is no longer interested in covering up imperfections. There was a time when the Singapore-born, London-based artist, who has inhabited the yeule moniker since 2014, would hesitate to release a song if something as much as a vocal crack stuck out in the mix. Following the success of 2019’s Serotonin II – an excellent full-length debut that introduced yeule’s enigmatic persona as well as their brand of digitized art pop, captured most brilliantly on the single ‘Pixel Affection’ – the project has come to serve as a means for Ćmiel to document and relate back to their own experiences in a multi-disciplinary fashion. To that end, despite having greater access to professional equipment, their process now often involves leaving in mistakes and accepting that some of their best material might still come to life in the space of their bedroom as opposed to a studio. Originally inspired by a Final Fantasy XII character caught ceaselessly between death and rebirth, yeule – as both a concept and a musical outlet – continues to occupy a liminal and temporal space but has undergone a clear evolution.

On their second album, Glitch Princess, co-produced with PC Music’s Danny L Harle, yeule adjusts their stylistic framework while remaining committed to the goal of yielding purity out of chaos. In an interview with the FADER, Ćmiel said they “wanted to depart from this natural earthy Gothic Renaissance-esque world that I built with Serotonin II” by entering a more “neo-technical, cyber-Gothic” realm; though conceptually and narratively focused, the record itself is less heavy-handed and more direct about its approach (“I like short sentences that say everything I felt at one go,” they declare on the opening track, which is largely reflected in the lyrical content of the album.) The way this shift manifests musically is palpable, too: While the atmosphere of Serotonin II was airy enough to land yeule on the cover of Spotify’s ‘Ethereal’ playlist, Glitch Princess distorts some of that dreaminess by injecting it with a language of violence, eroticism, obsession, and disassociation – elements that have been present in yeule’s music in the past, but never so uncompromisingly brought to the fore. The result is powerful: as challenging as it is infectious and as introspective as it is majestic.

Those qualities are entangled from the very beginning. “What makes you uncomfortable?” yeule asks on ‘Flowers are Dead’, and your answer may in fact lie in what has preceded it. Opening the album is ‘My Name Is Nat Ćmiel’, a confessional of sorts in which the cyborg-like character lists a number of things they find pleasure in at a particular moment in time. We can assume at least some of them still apply – “I like the way some music makes me feel/ I like making up my own worlds” – but the temporal distance between recording and listening, yeule’s glitched-up voice, and the specific intimacy of some of the statements have an uncanny effect. Throughout the album, yeule blurs the line between what is unsettling and exhilarating as a means of interrogating what it means to feel – to transcend the limits of both the digital and embodied self and achieve a boundless sense of freedom.

Their creative toolbox is appropriately varied. The second song, ‘Electric’, properly kicks off the album with a rapturous hook that’s drowned in distortion. The emo pop of ‘Don’t Be So Hard on Your Own Beauty’ is at once one of the album’s most conventional and hopeful moments, with yeule singing of tenderness as the antidote to the gaping void: “You still​/ Hold me even though/ I’m made of fire burning through.” At times, its aesthetic sounds less akin to Arts Angel-era Grimes than the horror game-inspired sounds of an artist like Yiiki, conjuring eeriness through off-kilter piano melodies and queasy electro-pop on a track like ‘Eyes’. But then there are overwhelmingly euphoric songs like ‘Bites on My Neck’ that power through their disorienting, blown-out structure to demonstrate the true scale of yeule’s ambitions, or ‘Too Dead Inside’, which evokes the existential questions that can creep into your mind when you’re trying to dance them away.

Ćmiel treats Glitch Princess as a kind of storage unit where realities both external and internal – including dreams and dangerous fixations – can coexist. It is raw yet carefully crafted, to the point where some of the errors that are integrated into it may actually be not accidental, but manufactured. That is the nature of the love that courses through the album: it hurts, it fades, and to make the experience less painful, you might as well cause the destruction yourself, especially when granted the option of staying alone with the ‘Friendly Machine’ that “Pretends to wipe my memory clean/ Pretends to make it all go away/ Pretends to make me feel quite ok.” The song that ends things off, ‘Mandy’, is ambiguous but jarringly confrontational, suggesting a sort of system failure – and hence, perhaps, a liberation.

But you can’t really put it in context unless you take into account the actual closing track, a four-hour-forty-four-minute ambient piece titled ‘The Things They Did for Me Out of Love’. (The promo copy I received did not include this track, but for the purposes of this review, and since it comes with all digital versions of the album, I listened to it once in full). Like an alternate reality, it’s easy to get sucked into it and lose track of time – fragments materialize and float in and out, synthetic vocals blend in with a human voice lost in sleep. Around the halfway point, the whole thing stops and starts life anew. “I had to walk into the fire to know how to feel,” Ćmiel sings over and over again on ‘Bites on My Neck’. This final act, then, can be read as an attempt to rise from the ashes after finally taking the plunge. More than that: it feels like it.