Melbourne power-pop group Romero have announced their debut album, Turn It On!, which lands on April 8 via Cool Death/Feel It Records. They’ve also unveiled the album’s title track, which follows the previously unveiled singles ‘Honey’, ‘Troublemaker’, and ‘Neapolitan’. Check out its Triana Hernandez-directed visual below, and scroll down for the LP’s cover artwork and tracklist.

“I was watching a Debbie Harry [Blondie] documentary and one of the quotes was ‘she just gets on stage and she turns it on.’ As soon as I heard this I paused it and started writing,” singer Alanna Oliver explained in a statement. “The lyrics flowed effortlessly. It was such a simple idea to channel that inner power. When I sing this song I am now a woman who knows what she wants and how to get it.”

Of the video, Hernandez added: “[Turn It On] music video uses classic horror film techniques to create a visual world that’s both eye candy and visceral. It’s a playful representation of their live shows taking you into a fantasy world of shimmery disco and pop, whilst keeping the rock aspect alive on screen through the eyes of your classic uninterested pub punter at the gig. For me it was a pleasure to work with a band that has such minimal and elegant visual references, yet so rich and raw purely through its actual music and synergy on stage.”

Turn It On! Cover Artwork: 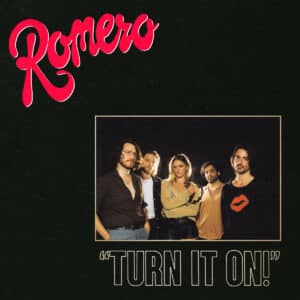 Turn It On! Tracklist: