Belle and Sebastian have returned with news of their 9th album and first studio LP in seven years. A Bit of Previous, the follow-up to 2015’s Girls in Peacetime Want to Dance, lands on May 6 via Matador. Today’s announcement comes with the release of the new single ‘Unnecessary Drama’, which arrives with an accompanying video. Check it out and find the album’s four variant covers and full tracklist below.

“The song is about a young person experimenting in being a human again after a forced hiatus,” frontman Stuart Murdoch said of ‘Unnecessary Drama’ in a statement. “The person is weighing up whether or not it’s worth the mess! Still, you dip your toe in and it becomes delicious, and you get too much of it. Between trouble and nothing, we still choose the trouble.”

The new album was recorded in Belle and Sebastian’s hometown of Glasgow after their plans to fly to Los Angeles in spring 2020 were scrapped due to COVID-19. “We did it together, us and the city,” Murdoch remarked. “This record was the first ‘full’ LP recording for B&S in Glasgow since Fold Your Hands Child, 1999. We clocked in every morning, we played our songs, we wrote together, we tried new things, we took the proverbial lump of clay, and we threw it every day.” 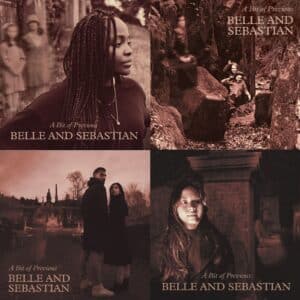 A Bit of Previous Tracklist: