Big Thief drummer and producer James Krivchenia has announced a new solo album: Blood Karaoke is set for release on April 15 via Reading Group. He’s also released the experimental LP’s lead single, ‘Emissaries of Creation’. Listen to it below.

Krivchenia put together Blood Karaoke by sampling unwatched YouTube videos found through random online generators, including clips of Microsoft Office PowerPoint presentations, video game walkthroughs, old local news clips, and more. “It was a very iterative, long process, lots of editing and putting together little moments or 10 second chunks with lots of samples. The music was conceived to be a somewhat unbroken 40 minute long composition and I think of the singles as excerpts,” he explained in a statement.

Big Thief issued their fifth album, Dragon New Warm Mountain I Believe in You, last month. The LP was produced and conceptualized Krivchenia, who put out his last solo album, A New Found Relaxation, in 2020. 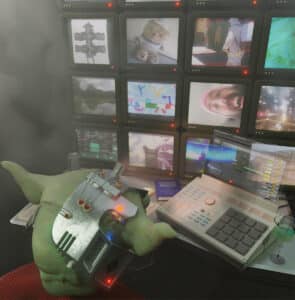