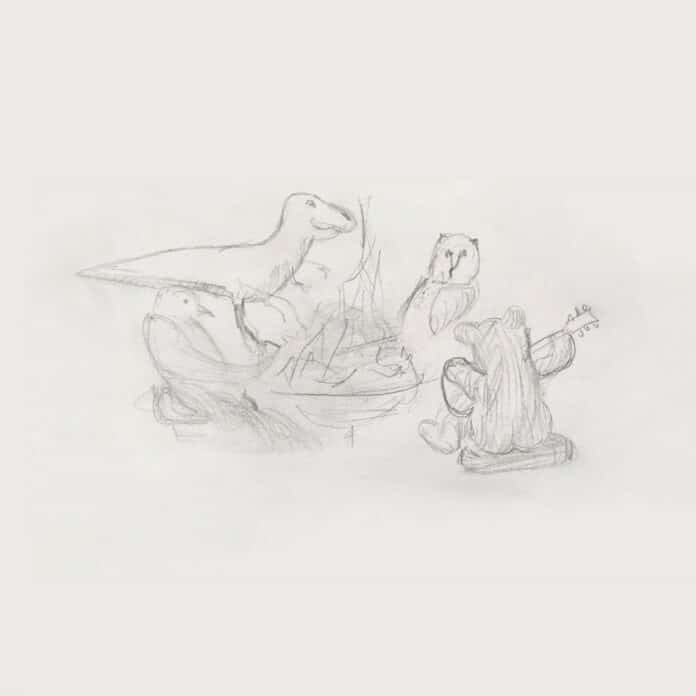 Something about the most acclaimed indie record in recent memory should be ever so slightly aggravating. Coming from a band that named their first album Masterpiece, you would expect the apparent seriousness of Big Thief’s ambition to be their biggest problem; now, they’ve followed up their pair of excellent 2019 releases, U.F.O.F. and Two Hands, with a rambling, 20-song double LP titled Dragon New Warm Mountain I Believe in You. But the thing that might throw some people off this time around is not how big of an achievement they’re trying to make, but how goofy and childlike their approach often sounds, how Adrianne Lenker’s meditations on the universe can feel both dorky and profound. On multiple occasions, the band leans so heavily on the hillbilly aesthetic that it almost makes everything seem like a giant joke. For any other group, this kind of move might suggest they’ve lost sight of what makes them great, that they finally went too far. For Big Thief, it means exploring how different sides of their identity can coexist within the same space. What they’ve come up with is nothing short of astounding.

It’s hard to explain how naturally Big Thief’s earnestness and playful humour manifest on Dragon New Warm Mountain I Believe in You, but ‘Spud Infinity’ offers a great example. A country tune complete with fiddle and harmony vocals courtesy of Twain’s Mat Davidson as well as jaw harp played by Lenker’s brother Noah, the track would seem to border on parody, but the jubilant atmosphere is the very thing that opens it up: Lenker’s philosophizing grows more and more absurd, relating “celestial” to “extraterrestrial” and throwing in references to garlic bread and potato knish before allowing a poignant message to come through: “When I say infinity I mean now/ Kiss the one you are right now.” More than ever, it’s a joy to follow Lenker’s unselfconscious flow of words, how her different inclinations as a writer join in the same dance, as if spurred on by the freedom the group has embraced. Her poetry feels equally distinct when reflecting on the nature of the cosmos (‘Time Escaping’), evoking the scariness of love (‘Little Things’), or observing ordinary activities (‘Certainty’), constantly aware and in awe of how time passes and everything is connected.

But if the sense of existential mystery that pervades the record is familiar, it’s juxtaposed by a kind of unburdened confidence and simplicity that’s new to Big Thief. It flows through ‘Change’, which makes for an excellent opener as it probes questions of death and personal heartbreak but frames them through the carefree perspective of a child. ‘Sparrow’, a biblical allegory in which four successive lines end with the word “apple”, appears to follow a similar structure, but the effect is much darker. Listening to Big Thief at their loosest can no doubt be a comfort, but they also have a subtle way of upending expectations by avoiding the easy trappings of whatever style they’re taking on. When they draw from electronic music, like on ‘Blurred View’ or ‘Wake Me Up to Drive’, it’s not to diversify their palette as much as accentuate elements ­– whether hypnotic, meditative, or cavernous – that are already present in the music.

The closer you listen, the more the album’s wild, sweeping gestures – the silly country rock of ‘Red Moon’, the patient contemplation of ‘Heavy Bend’, the intense yearning of ‘Love Love Love’ – seem connected by the band’s collaborative instincts, a willingness to stretch the homespun intimacy and openness that might have marked a single track across a wide range of moods. In pitching the idea for the album, drummer James Krivchenia, who is also credited as its producer, asked the question: “How do we maintain focus while recording and yet allow ourselves the freedom to explore dozens of songs without getting lost in the process?” Part of the answer came in recording the album in four different locations with four different engineers, and while you can point out the aesthetic variation between each session, the group has smartly disorganized the tracklist, so what’s mesmerizing is not some false narrative but the mystical quality that binds them together. Big Thief do in fact get a little bit lost, but it’s in that process that they end up finding themselves. To quote ‘The Only Place’, the goal is to “build that question as a house/ Where we’d reside.”

In his bio for the album, Davidson references a quote by Rainer Maria Rilke: “Works of art are of an infinite loneliness and with nothing so little to be reached as with criticism. Only love can grasp and hold and be just toward them.” I think about the words infinite loneliness, how closely they’re intertwined with love, and how, for as epic and masterful a statement as it is, the album keeps staring back into that void. Some of the its most striking moments, like ‘The Only Place’ and ‘Promise Is a Pendulum’, come when the band gives Lenker the space to be alone at her acoustic guitar, but the energy shifts when they fall into darkness together. “When you find the lonely tower/ Climb inside the darkest room/ Feel afraid, surrender your power,” she sings on ‘Flowers of Blood’, swaddled in layers of feedback. It’s the heaviest, fiercest song on the album, yet also gentle, hazy, and palpably intimate. In Lenker’s writing, aloneness is a universal condition, maybe even an inevitable destination, and Big Thief have never made it feel so infinite and timeless as on Dragon. It’s something to share and find your way around, with fear and love, forever and now.