Hey, ily! – the Billings, Montana band that started out as the solo project of Caleb Haynes and now includes Skyy Haman (synth), Conner Haman (drums), Stephen Redmond (bass), and Trevin Baker (guitar) – have announced their debut LP. Psychokinetic Love Songs is slated for release on April 29 via Lonely Ghost Records. It’s led by the single ‘Intrusive Thoughts Always’, which you can hear below.

“We wanted this song, as the first full band song on the album, to perfectly encapsulate the personality of the rest of the album,” the band told Brooklyn Vegan. “Catchy choruses, pummeling drums, and bizarre left turns. We’ve always wanted to write a thrash metal song, so with this song we thought: why not just put a thrash metal song in the middle of this seemingly regular emo song? That thought perfectly wraps up our process when writing this album. What would it sound like if we took out the traditional emo songwriting rules?”

Hey, ily!’s 2021 EP Internet Breath landed on our best EPs of the year list. Check out our Artist Spotlight interview with Hey, ily!. 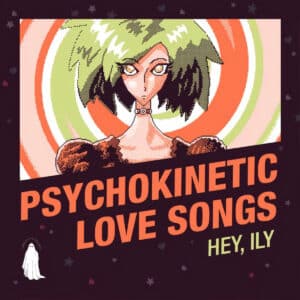