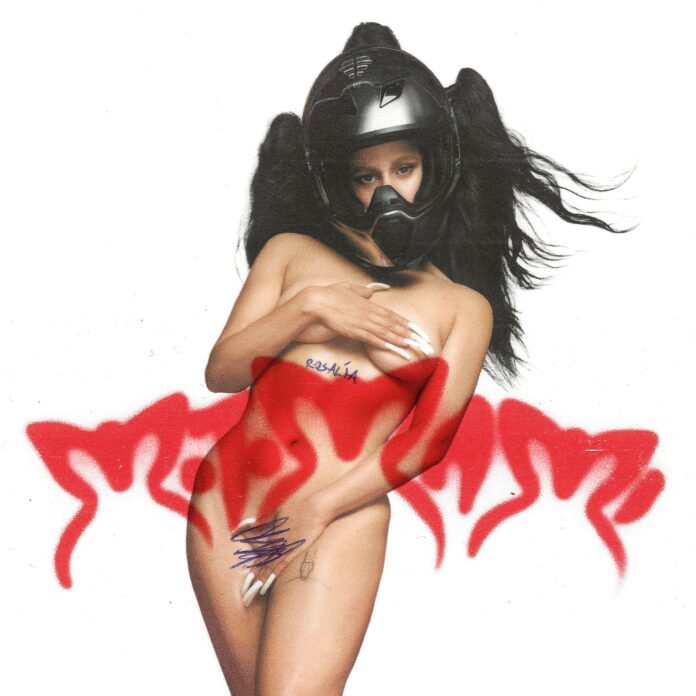 Rosalía begins MOTOMAMI with a proclamation. “Me contradigo, yo me transformo/ Soy todas las cosas, yo me transformo,” she sing-raps on ‘Saoko’: I contradict myself, I transform/ I’m everything, I transform. It’s a bold way to kick off her much-anticipated third album, not just because of how it shatters expectations musically – deconstructing 2000s reggaeton by interpolating Daddy Yankee and Wisin’s 2004 single ‘Saoco’ and then throwing in a ton of distortion and even an improvisational piano jazz breakdown – but also because of how much of a personal statement it is. The Spanish superstar’s striking, underappreciated debut album, 2017’s Los Ángeles, was a collection of re-recorded flamenco and folk songs; 2017’s Grammy-winning El Mal Querer sought to modernize the flamenco genre while adapting a 13th-century romance novel to explore toxic relationship. Right out of the gate, MOTOMAMI promises not only the continued evolution of Rosalía’s dizzying sound, but an expansive self-portrait that’s unlike anything she’s delivered before.

It’s not really her approach that changes on MOTOMAMI, but how much further she’s willing to take it – and how much more of herself she’s willing to show. It’s important to note that although El Mal Querer might be seen as the beginning of Rosalía’s effort to combine traditional and contemporary sounds and cultures, Los Ángeles, too, was impressive in its survey of a wide range of flamenco styles, not to mention the decision to end with an outstanding cover of Bonnie ‘Prince’ Billy’s classic ‘I See a Darkness’; from the earliest stages of her career, she displayed a readiness to move outside the rigid boundaries of her formal training (before graduating from the Catalonia College of Music, her albums were technically university projects). For all the acclaim that it brought her, her rise to international fame hasn’t come without controversy: flamenco purists of the Andalusian region were quick to accuse the Catalan singer of cultural appropriation, and her crossover success has raised legitimate questions about what it means for a white European woman to rise to the forefront of Latin pop.

MOTOMAMI brings forward Rosalía’s kaleidoscopic vision as well as her eclectic taste, borrowing from genres such as reggaeton and bachata as much as it does hip-hop, electro-pop, and avant-garde music. Rather than seeking to pioneer some all-encompassing musical aesthetic, it feels like Rosalía uses the album’s hybridized palette to broaden her avenues for artistic expression, and instead of sounding like a complete mess, it ends up offering a more intimate and nuanced view of her idiosyncratic personality. Part of this comes in the way she honours her influences, which feels sincere even when her playful confidence compels her to sneak in a few surprises: The most obvious example is ‘Delirio de Grandeza’, which pays homage to Cuban singer Justo Betancourt while incorporating a rap sample from the Vistoso Bosses’ 2009 track ‘Delirious’. More than a genre-bending artist with a penchant for futurism, MOTOMAMI foregrounds Rosalia’s gifts as a producer and arranger, working with the likes of Michael Uzowuru, Pharrell, Tainy, Sky Rompiendo, and El Guincho to create a cohesive experience that’s also refreshing and thrilling at every turn.

MOTOMAMI‘s structure points to its focus on duality, with MOTO implying strength and aggresion and MAMI bringing to mind vulnerability and nature; both are connected to femininity. This contrasting energy is evident in the album’s musical references: on the thumping ‘Chicken Teriyaki’, she namechecks Julio Iglesias, Naomi Campbell, and Mike Dean, while on ‘Bulerías’, over a familiar flamenco instrumental, she declares, “God bless Pastori and Mercé, Lil’ Kim, Tego and M.I.A.” Some of the contradictions tied up with the album aren’t exactly intentional, like the fact that the song that became an early hit, the Weeknd-featuring ‘La Fama’, is one of the few tracks where she addresses the downsides of fame.

The way Rosalía achieves a sense of freedom that feels natural is not through pure versatility, but earnestness. Just like the power of her voice has less to do with sheer talent than the way she wields it, the complexity of her work is not about its many layers but how she unfolds them, which is with pathos, control, and subtlety. Although its two-sided presentation makes sense, the album is really about working outside any binaries rather than reinforcing them. You don’t need to compare songs to feel those different facets coming together: ‘La Combi Versace’, featuring Dominican star Tokischa, is at once minimalist and invigorating, while the magic of ‘Bulerías’ stems from the way it experiments with a traditional format through percussion and vocal processing. ‘Hentai’ really forces you to look beneath the surface, pairing delicate balladry with raunchy lyrics before firing away a barrage of beats, perhaps so that the frenetic energy of ‘Bizcochito’ comes as less of a shock. Which, of course, it kind of does. Whatever path Rosalía chooses to take, it’s this restlessness that clearly lights the way.

Album Review: Rosalía, 'MOTOMAMI'Rosalía begins MOTOMAMI with a proclamation. “Me contradigo, yo me transformo/ Soy todas las cosas, yo me transformo,” she sing-raps on ‘Saoko’: I contradict myself, I transform/ I’m everything, I transform. It’s a bold way to kick off her much-anticipated third album, not just...