Shearwater have announced The Great Awakening, their first album in six years. The follow-up to 2016’s Jet Plane and Oxbow is due out June 10 via the band’s Polyborus label in partnership with Secretly Distribution. Lead single ‘Xenarthran’ arrives with an accompanying video directed by Emily Cross; check it out and find the album’s cover artwork and tracklist below.

“Xenarthrans are the ‘strange-jointed’ mammals, which mostly live in South America: armadillos, anteaters, and sloths,” Jonathan Meiburg explained in a statement. “Only one species of armadillo has wandered up to the southern U.S., and while we were recording The Great Awakening in Texas, I often saw them scurrying dimly through fields at dusk or snuffling in the mud after a rainstorm, and I couldn’t help admiring them. They’d walked thousands of miles on their wispy little feet, long noses to the ground, trundling into alien landscapes filled with unfamiliar danger. This song, and Emily’s eerie video, aren’t about armadillos, exactly—but they are about making your way through the dark spaces of a menacing but still very beautiful world. The roaring sounds near the end are howler monkeys I recorded in Guyana.” 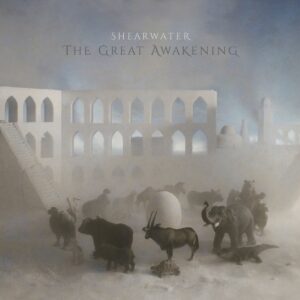