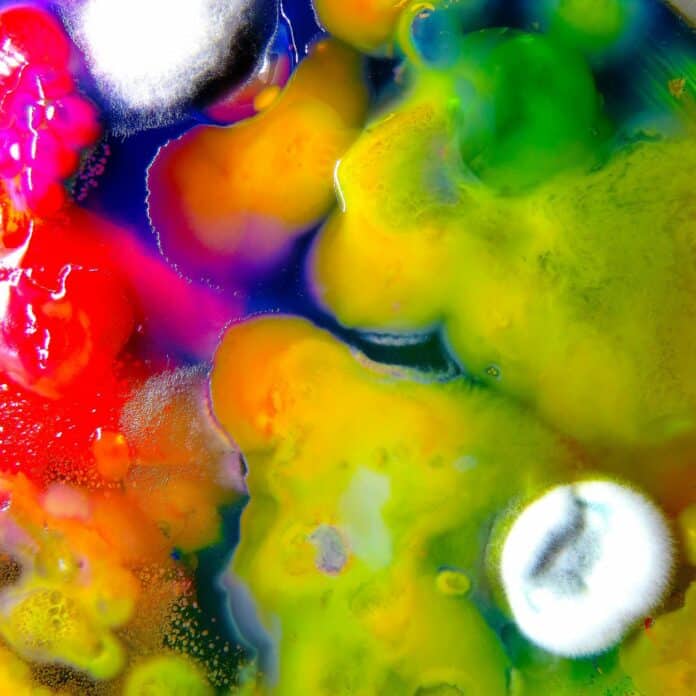 On its opening track, Famously Alive invokes the sense of dissociation that has marked much of Guerilla Toss’ output: “Wealth of happiness stolen/ No one else feels ever this broken,” frontperson Kassie Carlson sings on ‘Cannibal Capital’. If there’s a band that’s capable of translating the feeling of restless paranoia that pervades online interactions into sound – which might as well be what the song alludes to with lines like “I’m social with enemies and it takes the best of me” – it’s Guerilla Toss, who earned a reputation for their raucous, dizzying concoctions since they first started making waves as a Boston five-piece. Now the New York trio of Kassie Carlson, Peter Negroponte, and Arian Shafiee, the band’s perspective has evidently shifted on their fifth full-length and first for Sub Pop, which finds them injecting their wild unpredictability with a newfound sense of purpose. The result is their most urgent, vibrant, and deliriously infectious effort to date.

Regardless of whether the enemies on ‘Cannibal Capital’ refer to some kind of internet trolls – when the music is propelled by some of their catchiest melodies yet, that’s not really what drags you in – Famously Alive actively veers away from social commentary, which is something the band has pulled off in the past, particularly on 2018’s Twisted Crystal. The group wrote and recorded the new album at home in the Catskills during the isolation of the pandemic, and it’s all about how, really, the hardest enemy to face is yourself. At the time, Carlson had just entered recovery after struggling with opiate addiction, a battle that was documented on 2019’s What Would the Odd Do? EP. A different kind of pervasive anxiety still creeps up here and there, but it never overshadows the album’s commitment to a new life bursting with confidence and positivity – it feels like the protagonist has crossed over to the other side and is taking in the glorious mess with relentless exuberance.

Guerilla Toss’ brand of psych-pop is still noisy and frenetic, but the sugary swirl of glossy synths, crunchy guitars, and thumping grooves tell a different story. Famously Alive is their most approachable record to date, but it’s vibrant in a way that recalls the unbridled giddiness of hyperpop rather than watering down the band’s idiosyncratic sound. You could say they were already heading in this direction with Twisted Crystal, which definitely had its poppy and motivational moments – but it’s genuinely refreshing to hear a band like Guerilla Toss making music that’s inspiring without having to make some point about the absurdities of the universe, and music that feels like a rush without necessarily being trippy. The magic of Famously Alive is that it’s entirely unpretentious without losing its character; there’s still a lot going on in these songs, but just because they’re heavily saturated doesn’t mean they’re overly heady or conceptual. “Each day a celebration/ I am a radiant sun/ All things a fascination/ Happy me, happy me, happy me, happy me,” goes the inescapable hook of ‘Happy Me’.

After fixating on things that are alien and mystical, it’s captivating to hear Guerilla Toss channeling the joy of reconnecting with one’s own body, and making that journey feel like just as much of an adventure – even while sticking to a roughly 30-minute runtime. “I’m feeling godly/ But just for me,” Carlson proclaims on ‘Live Exponential’, a song that turns loneliness into a cause for celebration against beaming, effervescent production. Drawing its lyrics from a poem written by a close friend of the band, Jonny Tatelman, the title track is an anthem of self-resilience that proves getting better doesn’t mean you have to be any less strange. The trio embraces this mindset by never staying in one lane for too long, dipping into otherwordly territory on the sparkling ‘Wild Fantasy’ before splashing your face with the squelchy ‘Pyramid Humm’. “Tell fantasy dreamer/ Who pulled at your sleeve/ The illusion that took you out and the phantoms you spoke to/ That when you woke up/ No angel was there,” Carlson sings on the latter. Still, for all the uncertainties that come with it, Guerilla Toss make being alive sound like a heavenly deal.

Album Review: Guerilla Toss, 'Famously Alive'On its opening track, Famously Alive invokes the sense of dissociation that has marked much of Guerilla Toss’ output: “Wealth of happiness stolen/ No one else feels ever this broken,” frontperson Kassie Carlson sings on ‘Cannibal Capital’. If there’s a band that’s capable of...