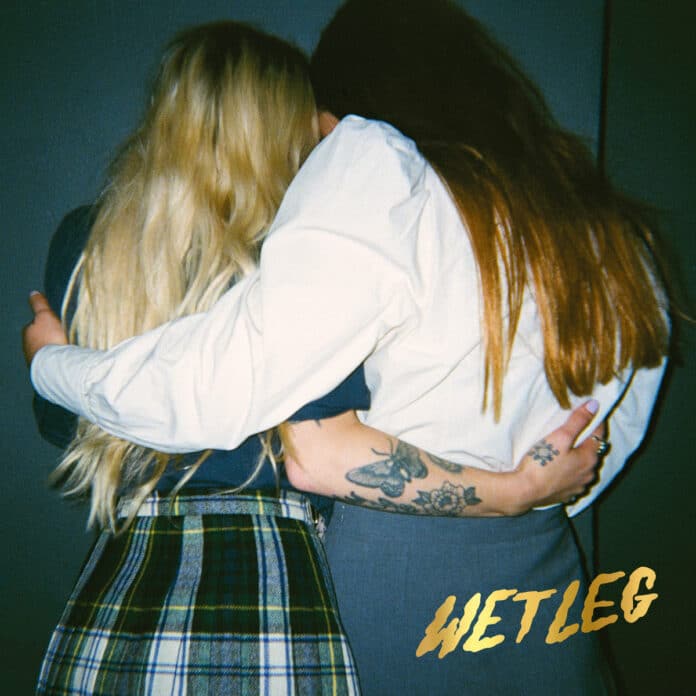 Wet Leg know the formula, and they know it by heart. Rhian Teasdale and Hester Chamber deliver catchy, sardonic, irrepressibly tuneful indie songs that soak up influences from a bunch of different eras – from the Ronettes to the B-52s, Pavement to Franz Ferdinand, the Breeders to the Strokes – while making themselves relatively at home in the current wave of talky British “post-punk” bands. And then they put their own spin on it, combining deadpan wit, flashes of vulnerability, and a touch of the surreal in a way that feels distinctly their own. ‘Wet Leg’ has an infectious hook and shout-along chorus that’s designed to make you want to dance, but mostly it makes me laugh at the thought of hearing 15 seconds of it in a telecommunications ad circa 2009 and then discovering it’s called ‘Wet Dream’ and includes lines like, “What makes you think you’re good enough to think about me when you’re touching yourself?” Wet Leg’s brand of absurdist humour – proudly dumb, often subtly clever, always unselfconscious – is a breath of fresh air in a scene that’s notorious for taking itself too seriously, and the fact that it comes in a poppier package means it’ll piss plenty of people off.

Which it already has. Since emerging last June with the viral hit ‘Chaise Longue’, Wet Leg have been met with rapturous praise and cynicism alike; despite having only played four shows, they already had a deal with Domino Records, and each new single leading up to the release of their self-titled debut LP only boosted their momentum. I don’t know if ‘Wet Dream’ has made it on any commercials, but Wet Leg did perform the song on live TV earlier this year, and it wasn’t their first late-night appearance. Their rapid rise to indie darling status has been as unconventional as their music is irresistable, a success story that seemed possible two decades ago but is now usually an indicator of overblown hype. Try and drown out the noise, though, and it’s hard to deny what the record has to offer, even beyond the immediate charm of the early singles. Take those into account, and the album as a whole still manages to live up to the hype. The duo’s unique chemistry is all over these twelve tracks, and their personality never feels manufactured or overly sanitized.

Wet Leg weren’t thinking about any of that when they were making the record. They couldn’t have – it was done before the world had the chance to hear ‘Chaise Longue’ – and that’s probably part of why it works. The quirky, casually playful energy they’ve become known for never comes off as knowingly self-aware, which makes the sexual innuendos (“Would you like us to assign someone to butter your muffin?”), biting remarks (“When I think about what you’ve become/ I feel sorry for your mum”), and occasional clumsiness (“You’re so woke/ Diet Coke”) land just as well. Memorable one-liners aside, the album generally mirrors the excitement of hanging out with a friend and not knowing if the next thing you’ll hear will be some bit of nonsense or an accidental revelation. You’re complaining about the chaos of being in your 20s – annoying exes, hating parties, getting sucked into social media – how it all makes you feel alone even though someone’s right there listening.

On ‘Ur Mum’, Teasdale lets out a long, cathartic scream, but the release is almost calculated – it’s not until ‘Too Late Now’ that things suddenly get real, when indecision becomes so paralyzing that she finds herself declaring, “I’m not sure if this is a song/ I don’t even know what I’m saying.” Wet Leg have said ‘Too Late Now’ is about “sleepwalking into adulthood,” which may be literal, but look at it another way and it’s kind of a fitting metaphor for the album’s lyrics – they’re not really about navigating adulthood, but the strange situations you get into when it just sort of happens. It’s the way the duo channel those emotional experiences that makes their music stand out. Their satirical lens might be what catches your attention, but Wet Leg showcases a more dynamic approach. It’s clear they want you to have fun, but something keeps standing in the way: The mantra on ‘Angelica’ is “Good times, all the time,” but the song itself, which builds to a noisy, distorted climax, is all about the alienation of trying to stick to it.

Similarly, ‘Being in Love’ and ‘Loving You’ make their titular subjects sound like equally impossible tasks. But where the first mixes frustration with driving guitars and a punchy hook, the latter is more downbeat while seething with genuine anger, as does the stripped-back yet unsparing ‘Piece of Shit’. Sometimes things turn into a ridiculous mess, and there’s no point dressing up the confusion: “It all used to be fun, now you’re swinging a gun ‘round your head,” Teasdale sings on ‘I Don’t Wanna Go Out’, before quipping, “At least we are all going to die” – a pretty grim statement from a band whose stated goal is to have fun. But if you’re all in on the same joke, sleepwalking through the same weird nightmare, maybe it kinda starts to make sense.

Album Review: Wet Leg, 'Wet Leg'Wet Leg know the formula, and they know it by heart. Rhian Teasdale and Hester Chamber deliver catchy, sardonic, irrepressibly tuneful indie songs that soak up influences from a bunch of different eras – from the Ronettes to the B-52s, Pavement to Franz Ferdinand,...