Interpol Announce New Album ‘The Other Side of Make-Believe’, Share Video for New Single ‘Toni’

Interpol have announced their new album: The Other Side of Make-Believe arrives on July 15 via Matador. Today’s announcement comes with the release of the new single ‘Toni’, which is accompanied by video from director Van Alpert. Check it out and find the LP’s cover art and tracklist below.

“It was a blast working with Van Alpert on the video for our song Toni,” singer Paul Banks said in a statement. “We bonded over shared film inspiration as well as a passion for classic music videos by the likes of Glazer, Cunningham and Jonze. Van, in my opinion, is in the club with these legends; and it’s exciting to watch him build his own enduring body of work.”

“I wrote a crazy idea that I felt was new for INTERPOL, a hyper-modern, cinematic dance film,” Alpert added. “A “Lover’s on the Run” story, with a classic cliffhanger ending. Dream job working for my all-time favorite band! Paul Banks ties everything together and elevated the concept, because he’s naturally a great actor, artist, and collaborator.”

Last year, it was reported that Interpol were working on the follow-up to 2018’s Maraude in London with Alan Moulder and Flood. Talking about working on the album remotely across 2020, Banks said:

We usually write live, but for the first time I’m not shouting over a drumkit. Daniel and I have a strong enough chemistry that I could picture how my voice would complement the scratch demos he emailed over. Then I could turn the guys down on my laptop, locate these colourful melodies and generally get the message across in an understated fashion. Flood told me the vocals on the demos evoked Mickey Rourke in Barfly, singing to a patron at the end of the tabletop, and we never felt the need to flip that smoky intimacy into something big and loud when it came to rehearse and record. I got a real kick out of doing the opposite.

The Other Side Of Make-Believe Cover Artwork: 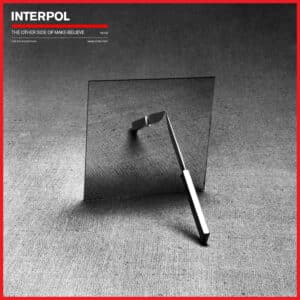 The Other Side Of Make-Believe Tracklist: