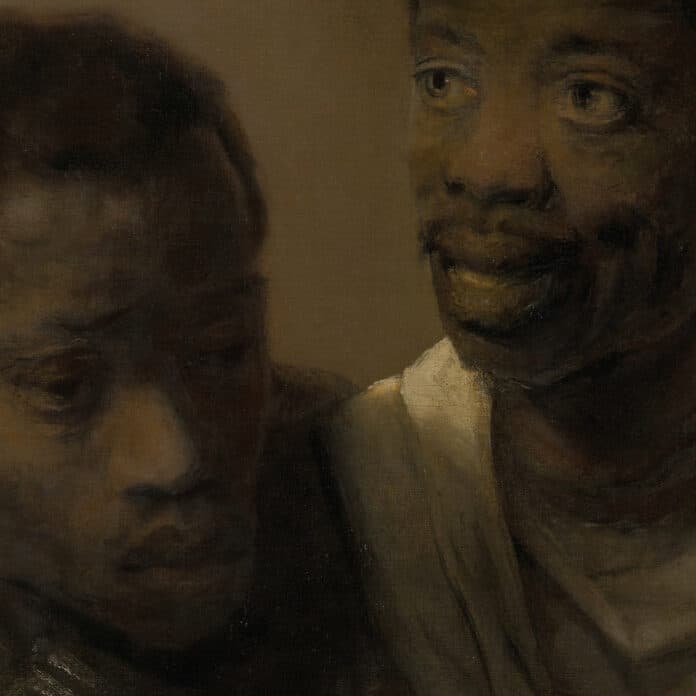 Aethiopes, the latest project from the prolific New York rapper billy woods, is a frayed tapestry of cultural narratives. woods is a master storyteller at his apex, and he fills the album with vivid characters and haunted spaces. Born from a collaboration with producer Preservation, Aethiopes unearths a legacy of bygone samples, reckoning with colonial histories, personal histories, and the indivisibility of the two (not unlike Preservation’s own Eastern Medicine, Western Illness). It’s an ambitious work from woods: an artist who never repeats himself, always moving into new creative terrain.

woods’ lyricism is dense, packed with an arsenal of allusions from Camus novels to Earl Sweatshirt lines. His meter is unpredictable, and his focus is fluid. Throughout the album, woods shuffles between spaces and perspectives, making drastic temporal leaps. He moves across continents and shifts from the eyes of children to adults. Aethiopes builds around fragmented narratives: cryptic vignettes of histories, both personal and collective. On ‘Christine’, a track named after the eponymous automobile from Stephen King/John Carpenter, woods weaves together a tale of a dead man’s car – a “coffin running around” – and its surrounding community. Aethiopes’ vignettes paint portraits of people and the unstable spaces they inhabit: microcosms of larger narratives.

On Aethiopes, woods dials down his typical sardonicism, fusing cynicism with moments of sincerity. The album features some of his most emotive vocal performances. This isn’t to imply the album isn’t funny – it is (“shipwrecked Europeans swimming with the virus shot out like God’s semen,” he raps on ‘Wharves’.). Yet beneath woods’ trademark bleakness rests a forlorn earnestness, most visible in Aethiopes’ introspective moments. The gut-wrenching ‘No Hard Feelings” opens with a barrage of associative imagery. Then, halfway through, it moves into a forlorn narrative about a man who’s stood-up for a hotel rendez-vous. Alone, he smokes and channel surfs. woods’ attention turns to the cycle of scenes that flicker across the TV screen. The specifics of the album’s characters and their histories remains ambiguous, but the melancholia is undeniable.

Like some of woods’ other recent projects, Hiding Places (produced by Kenny Segal) and Haram (produced by The Alchemist), Aethiopes is a single-producer collaboration. The result is a both thematically and texturally cohesive project, strung together with seamless transitions. It’s a work of undeniable ambition, melting genre boundaries and thriving in the in-between spaces. ‘Harlaam’ (which woods co-produced) begins with a looped big band sample, bolstered by wailing brass. Then, halfway through, the song re-forms as a frenzy of disharmonious piano chaos, notes tripping over themselves. It’s arrhythmic, but this doesn’t stop woods and his feature Fatboi Sharif from rapping over it. Preservation’s sampling is unorthodox, plucking sounds seemingly outside the purview of modern hip-hop. His samples are artifacts: old sounds (e.g., jazz, dialogue snippets, baseball play-by-play) crackling with vinyl static. Preservation’s an archeologist, excavating lost sounds and breathing new life into their bodies. Yet his production goes beyond mere re-purposing. Integrating archaic sounds within hip-hop conventions positions the record outside of time. It’s a haunted project, deeply rooted in the past, yet beyond mere nostalgia.

Still, none of these subversions or out-of-the-box samples impede Preservation’s ability to make hard-hitting beats. In fact, it’s the opposite. Preservation finds new potentials in his samples. ‘Heavy Water’ loops a short piano sample, sparking a frantic energy through the constrained repetitiveness of the loop. Recurring flute samples imbue a delicate emotionality into the often bassy and noisey mixes. The harmonica bursts on ‘NYNEX’ expand the blistering drum loops into a blusier terrain, soaking the high-energy rhythm with a thick atmosphere. Most impressive is Preservation’s ability to craft immersive tracks with little-to-no percussion; ‘No Hard Feelings’ and ‘Remorseless’, two of the most emotional songs here, find woods spitting over drumless compositions. In these moments, Preservation offers a triumph of restraint.

There’s a steady progression of features across the album: some big names, some small, yet all solid verses. Nonetheless, Preservation’s beats sound most natural accompanied by woods’ voice, with his staccato flow and enigmatic lyricism. Aethiopes feels delicately crafted: words and sounds intricately laboured over, yet never to the point of rigidness. It’s a fluid work, floating between temporalities and between people. Over these last few years, woods has continuously proven himself as one of the most talented and original working rappers. Aethiopes – his boldest and most lyrical tango with history – just may be his masterpiece.