Drive-By Truckers have announced their new album, Welcome 2 Club XIII, which arrives on June 3 via ATO Records. Today, the band has shared the record’s title track, alongside an accompanying music video. Check it out and find the album cover and tracklist below.

‘Welcome 2 Club XIII’ pays tribute to the Muscle Shoals honky-tonk where founding members Patterson Hood and Mike Cooley got their start with their former band, Adam’s House Cat. “There were no cool bars in town and Club XIII was the best we had, but it wasn’t all that good, and our band wasn’t particularly liked there,” Hood remarked in a statement. “From time to time the owner would throw us a Wednesday night or let us open for a hair-metal band we were a terrible fit for, and everyone would hang out outside until we were done playing. It wasn’t very funny at the time, but it’s funny to us now.”

Hood added: “Cooley and I have been playing together for 37 years now. That first band might have failed miserably on a commercial level, but I’m really proud of what we did back then. It had a lot to do with who we ended up becoming.”

Following 2020’s The Unraveling and The New OK, the new LP was produced by longtime collaborator David Barbe and was created over the course of three in the summer of 2021. It features background vocals from Margo Price, R.E.M.’s Mike Mills, singer-songwriter Schaefer Llana, and more. 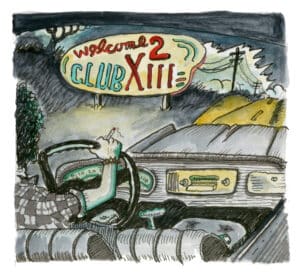 1. The Driver
2. Maria’s Awful Disclosures
3. Shake and Pine
4. We will never wake you up in the morning
5. Welcome 2 Club XIII
6. Forged In Hell and Heaven Sent
7. Every Single Storied Flameout
8. Billy Ringo In The Dark
9. Wilder Days