Album Review: Spiritualized, ‘Everything Was Beautiful’ 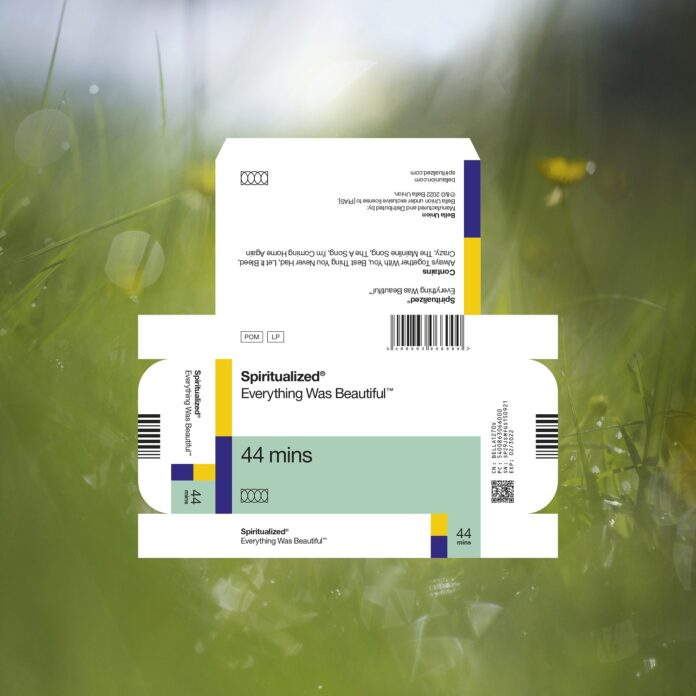 If there’s one thing that stories about space travel have taught us, it’s that time gets all tangled up. Maybe that’s why it’s challenging to form a clear-cut narrative around Spiritualized’s latest album. In more ways than one, Everything Was Beautiful is tied to its predecessor, 2018’s And Nothing Hurt: not only does it complete the famous line from Kurt Vonnegut’s Slaughterhouse-Five – a quote frontman Jason Pierce had considered using as early as the mid-‘90s – its songs are also culled from the same sessions that produced that album, which date back to 2013 and 2014. The idea was to originally release a double LP with the full quote as the title, but separating them in this way gives Everything Was Beautiful a different emotional weight. Compared to the quiet, weary restraint displayed on And Nothing Hurt, an album so gruelling to make Pierce promoted it by saying it might be his last, Everything Was Beautiful is a triumphant return to the epic arrangements and overblown production that fans have come to expect from the project. But “return” is a tricky word to use here – one album obviously came after the other, but once you start to meet the music on its own intergalactic terms, the relationship between them becomes harder to pin down.

And that’s before you take into account the rest of the Spiritualized universe. On one hand, Everything Was Beautiful, their ninth studio album, feels in conversation with a significant part of the band’s catalog, particularly the 1997 masterpiece Ladies and Gentlemen We Are Floating in Space – and though they haven’t released a bad album since, it’s maybe the first that seems capable of matching it in ambition, depth, and scale. At this point, Spiritualized have such a uniquely identifiable sound that listeners could spend a long time not only decoding the album’s many allusions, but also pointing out similarities to specific moments in the band’s past. But there are also elements of Everything Was Beautiful, whose title so perfectly encapsulates the nostalgia it both dwells in and elicits, that directly attempt to pull from or recreate that past, from the medicine-themed packaging that calls back to Ladies and Gentlemen to the fact that a female voice, this time Pierce’s daughter Poppy, announces the album’s title on opener ‘Always Together With You’. When it all exists in the same continuum, the album seems to ask, how do you create something that carries the same unshakable spirit while standing firmly on its own? How do you turn some hazy vestige of the past into a beautiful expression of the present?

Right from the start, the album finds Spiritualized at their most invigorated and alive. The magnificent opener ‘Always Together With You’ relays the singer’s devotion in a language both cosmic and human in its simplicity, revelling as much in the transportive layers of space-rock instrumentation as the immediacy of classic ‘60s pop. “If you want to be a universe, I would be a universe for you,” he sings, a mission he accomplishes not only through the string of references he weaves into the tracks, but also by employing a large group of musicians in order to lift and transform ones that might at one point have fit into the relatively subdued and somber world of And Nothing Hurt. They sound just as rich and lush, but more determined to continuously and meticulously drive the momentum forward instead of ambling around the same space. It’s what allows highlights like ‘The Mainline Song’ and ‘Let It Bleed (For Iggy)’ to reach transcendent heights, riding along ecstatic grooves and soaring into celestial choruses while retaining a remarkable balance. Even the record’s calmest moment, the country-leaning Nikki Lane collaboration ‘Crazy’, feels less like a sigh of relief than a parallel universe-take on the romantic rush of ‘Always Together With You’.

Everything Was Beautiful might sound like it’s catering to longtime fans, but even those who have the faintest familiarity with the band’s music should find something to enjoy in its glorious yet reflective maximalism. There might be something to be gained in trying to make sense of the euphoric sentiment of the album in the context of Pierce’s ongoing preoccupation with mortality, but even when he engages with that history on the 10-minute closer ‘I’m Coming Home’, it still makes for a rousing, joyful finale. “Kinda had it with philosophy/ ‘Cause I’m thinking I am but I’m failing to be,” he admits, and home seems less like an old comfort than a new destination. Pierce invites us on that journey, the kind that will definitely make you reminisce on the past. But connected as it is to everything that came before it, the moment you fall for Everything Was Beautiful is the moment it becomes its own thing.