Phoebe Green has announced her debut LP, Lucky Me, which arrives on August 19 via Chess Club Records. To coincide with the news, Green has unveiled a Piers Dennis-directed video for the album’s title track, which you can check out below, along with her upcoming tour dates.

Green had this to say about the new single in a press release:

‘Lucky Me’ explores the idea of disguising self-destructive behavioural patterns due to a feeling of guilt for living a seemingly easy life. I’m very lucky in so many ways that I almost feel ungrateful for still experiencing such difficulties with my mental state. I frantically search for a trivial, tangible cause of distress so that I don’t have to dig too deep or accept that I might just be a bit mentally fucked, then altogether silence myself when I imagine how others may be perceiving me and my actions. The song represents the common defence mechanism of invalidating and dismissing my emotions before anyone else can.”

I wanted ‘Lucky Me’ to be the title track of the album as this is very much a running theme throughout; analysing and dissecting my experiences and emotions as opposed to feeling them, as they feel easier to digest that way. The title almost feels sarcastic and snarky depending on which way you look at it, and as I use humour to cope a lot of the time it does seem fitting. But I am actually extremely lucky to still be here so there is some sincerity in there somewhere.

Commenting on the album, Green added: “When I was younger, I definitely hid behind the instrumentation: as long as that was cool, I was cool, or whatever. This time, I know I’ve grown, because I’m taking up more space within a song. I wanted to be the biggest thing in the recording. It’s so personality-driven that the sounds are just enhancing things, rather than dominating the whole song.” 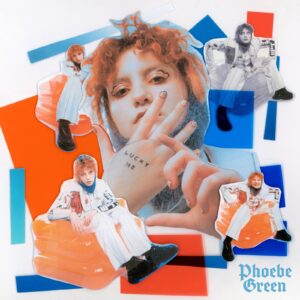