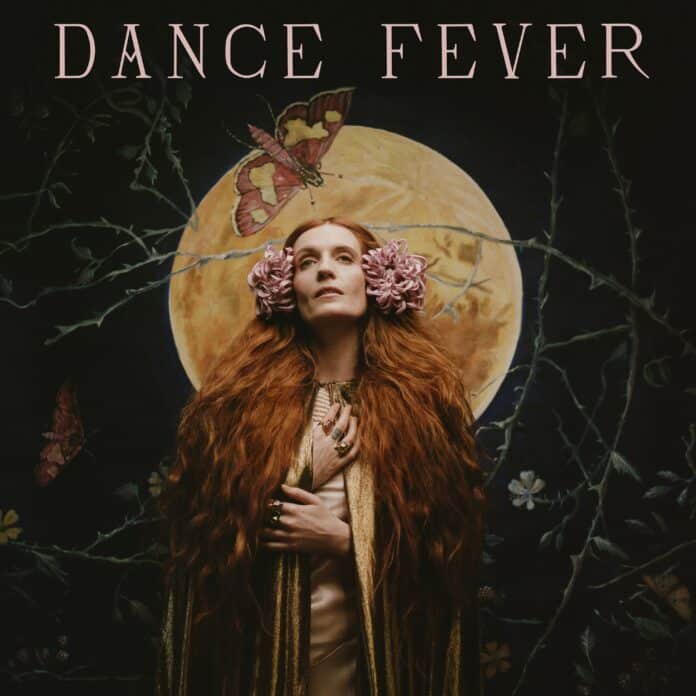 As a star, Florence and the Machine has always seemed unshakable. Since crashing into the upper echelons of mainstream pop with 2009’s Lungs, Florence Welch has shown an unwavering commitment to making art that is as grandiose as it is timeless, maintaining a vision that can only be described as titanic where others would settle for “anthemic” or “cathartic.” Not even singing ‘Margaritaville’ alongside Jimmy Fallon days before the release of her new album could shatter her otherworldly persona or detract from the thrill of her performing a new song that same night – four albums into her career, she clearly has nothing left to prove. Her songs are home to larger-than-life emotions lifted by her sweeping ambition and inimitable voice, and even if Florence and the Machine records have sometimes fallen short of cohering into an even bigger and more profound statement, doing anything other than marvel at the spectacle seems entirely out of the realm of possibility.

Dance Fever, the band’s latest, finds Welch returning to the euphoric bombast of her earlier work in order to interrogate what she and her art are made up of; her way of “winking at [her] own creation,” as she told Vogue. More than any other Florence and the Machine album, it is deeply human and conflicted, approachable yet struggling to let go of the musical and symbolic language that has come to define the project, where everything is a matter of life and death. During the writing process, Welch was fascinated by the concept of choreomania, the “dancing plague” that spread across Europe in the late Middle Ages and drove large groups of people to dance themselves to death – the perfect metaphor for someone so feverishly devoted to the ritual of performance, even when it comes at the cost of true self-knowledge.

If Welch’s songwriting tends to frame personal and collective struggle as a constant battle between heaven and hell, Dance Fever immediately stands out by setting the drama on a much smaller stage. ‘King’ opens with an argument in the kitchen about the limits of her art and the prospect of motherhood, and before it has the time to erupt into a classic Florence and the Machine anthem, the song’s persistent drum beat accompanies the singer as she turns the dispute inwards. “I am no bride/ I am no mother/ I am king,” she howls, a refrain as iconic as her best but ultimately more striking for its ambivalence, each king landing on an ominous note. She continues to reach for such declarations throughout the album’s first half; the next track, called ‘Free’, is a more straightforward attempt at capturing the unabashed joy of music in an album that seems constantly torn by its power. It’s immediately offset by the piercing self-awareness of ‘Choreomania’, which begins with the line: “I am freaking out in the middle of the street with the complete conviction of someone who has never had anything actually really bad happen to them.”

At times, the confessional nature of Welch’s lyrics rises above the theatrical and propulsive qualities of her music. As much as she contemplates her relationship with “the song” and revisits familiar iconography that has marked her previous output, she also demystifies her image with admissions of crying into a bowl of cereal and jokes about evangelicals and how “Heaven is now overrated.” She’s “just another screaming speck of dust,” she sings on ‘Girls Against God’, and confronts herself with questions like, “Is this how it’s always been/ To exist in the face of suffering and death, and somehow still keep singing?” The more the album progresses and she realizes she’s yet to find the answers, though, the more it starts to lose momentum, stumbling rather than settling into the uncertain stillness.

Though she reserves space for intimate cuts like ‘Prayer Factory’ and ‘Restraint’, it’s here that Welch and her collaborators fail to evoke the tension that belies them in a way that feels intentional or imaginative, even if the rawness is captivating. One of the quieter moments that leaves a more lasting impression is ‘Back in Town’, where subtle waves of brass and synth illuminate a dark and restless night. But it’s not just the shorter songs that could have been fleshed out; after the opening trio of high-energy tracks, some of the upbeat songs that attempt to pick up the pace (‘Dream Girl Evil’, ‘Daffodil’) can also feel slightly underdeveloped. This might due to the fact that there’s a clear distinction between the songs Welch produced with Jack Antonoff and those aided by Dave Baley of Glass Animals, and it doesn’t necessarily serve to accentuate the album’s divided core. But Welch’s lyrics can at times feel less inspired and potent, too, particularly with lines like, “Make me evil/ Then I’m an angel instead/ At least you’ll sanctify me when I’m dead.”

Everything still sounds magnificent, of course, even if not every song unravels with the same dramatic intensity as ‘Heaven Is Here’, which actually benefits from being co-produced by both Antonoff and Baley. ‘My Love’ may not be the most complex song in Welch’s catalog, but its danceability has a strange way of amplifying the heavy frustration of the chorus: “I don’t know where to put my love.” That sentiment finds its way back on the following track, where she marvels at herself for having made it through “this somewhat drunken joke” and reaches a poignant realization: “Sometimes I see so much beauty I don’t think that I can cope.” On Dance Fever, Welch devotes all of her effort to the pursuit of holding onto it, extracting the real from the mythical.