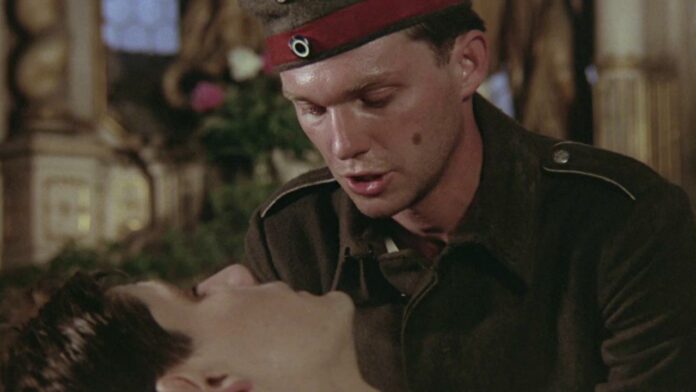 Based on the German novel by Erich Maria Remarque, All Quiet on the Western Front is an English language TV movie adaptation set in World War I. Despite the television release, the 1979 adaptation has an epic, cinematic quality about it, thanks to the large-scale scenes in trenches and bombed villages, as well as the main character’s poignant narration. Paul Baumer (played by Richard Thomas) is a young German soldier who enlists to fight for his country. At the beginning of the war, he and his classmates are filled with idealistic, patriotic ideas about Germany and warfare, and these ideas are reinforced when they attend a rigorous training camp in preparation for battle.

Over the course of the war, Paul and his friends come to realise that much of the information they have been fed was propaganda. An older veteran, Ernest Borgnine’s Stanislaus Katczinsky (affectionately called Kat), is a key player in the boys’ disillusionment. Kind and patient, he treats them like people rather than soldiers, and helps them learn the harsher truths about war. Ironically, Remarque’s book was banned in his own country during the Second World War, which now gives the story an added layer of authenticity and urgency. Here are the best quotes from the 1979 film adaptation.