The Best Songs Featured in HBO’s Euphoria (So Far) 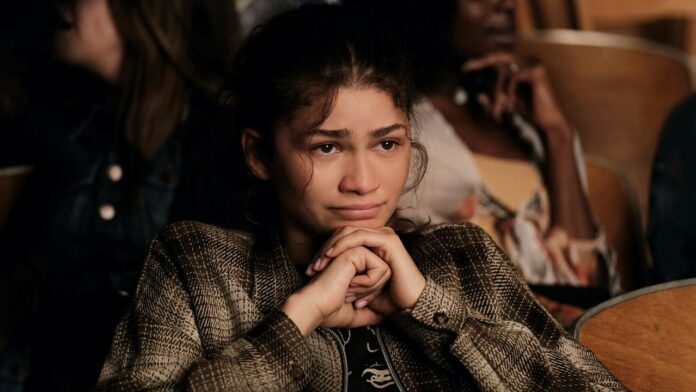 HBO’s hit teen drama Euphoria has a distinctive visual aesthetic, which has made the show easy to distinguish from others like it – the characters wear glittery makeup and bright outfits, the lighting is alternately colorful and stark, and the camera maneuvers draw the viewer right into this hyper-stylized world.

Plot-wise, the series follows teenager Rue (Zendaya), who struggles with addiction following her father’s death. She has drifted away from her best friend Lexi (Maude Apatow), so the only company she finds is with her mother Leslie (Nika King), sister Gia (Storm Reid), and dealer Fez (Angus Cloud). These three characters are often the ones to deal with Rue’s lies and overdoses – until Jules (Hunter Schafer) moves to town. Jules befriends some of the other girls in Rue’s circle, including Kat (Barbie Ferreira), who is on a journey of self-discovery and reinvention. This is influenced by Maddy (Alexa Demie), who is dating the violent Nate (Jacob Elordi). In season 2, Lexi’s self-absorbed sister Cassie (Sydney Sweeney) becomes involved in a messy love triangle with Nate and Maddy, who is her best friend.

Each episode focuses mostly on one of these characters but always returns to Rue, who is also the (unreliable) narrator. Every character has their own distinctive traits, and some even have their own theme song. Along with the vibrant visuals, Euphoria is also known for its shimmery soundtrack. The show is scored by English artist Labrinth, who brings a unique sound to the series. Here are some of the best songs featured in Euphoria‘s first two seasons.