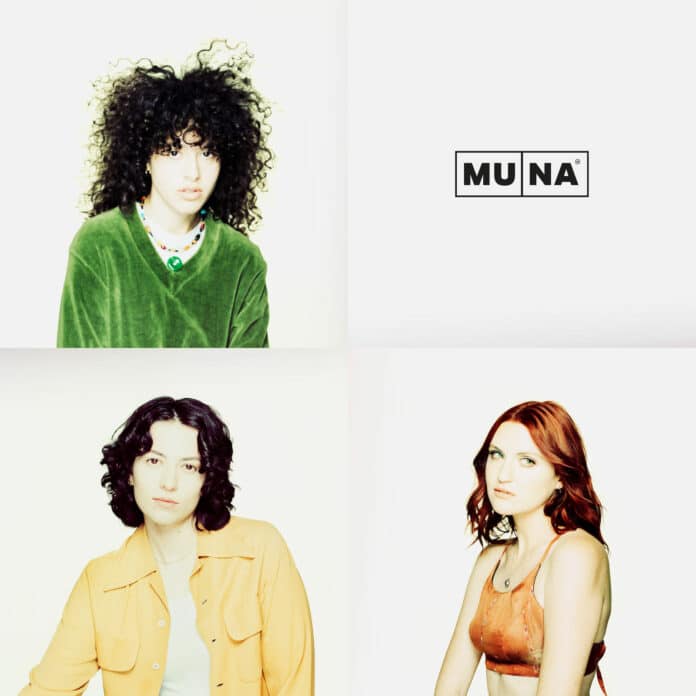 In the fourth track of their new self-titled record, synth-pop trio MUNA – consisting of LA natives Katie Gavin, Naomi McPherson, and Josette Maskin – considers what it means to forge a new path. “If we’d kept heading the same direction,” ponders Gavin, the lead singer, “Would we be home by now?” After their standout 2019 record Saves the World, their career took a turn when they were dropped by their major label just as the pandemic began, but rather than hitting the brakes the band hurtled forward into new music and a poppier sound. To release an eponymous record this far into their career is an admirable act of self-definition; as their debut since being signed to Phoebe Bridgers’ label Saddest Factory, this project maps change, heartbreak, and self-discovery, blending lilting Americana and vibrant disco.

The album’s opener, ‘Silk Chiffon’, features Bridgers herself, and serves as the breezy pop embodiment of lazy afternoons and youthful freedom; the hook “Life’s so fun, life’s so fun/ Got my mini skirt and my rollerblades on” went viral on TikTok last year, with users affixing it to clips of coffee runs and pastel sunsets. Gavin’s vocals are both wistful and contented as she charts the slow fade of summer days, with faintly garbled harmonies running behind acoustic guitar to create the feeling of plunging into cool water before rising into the sunshine. Yet if this track is drenched in ebullience, the next song, ‘What I Want’, provides a sharp sonic contrast, with an explosive drum track and shimmering ‘90s keys. The chorus ushers in synths that leap and thump in flashes, like shafts of light shooting from a disco ball. “I want the fireworks/ I want the chemistry,” Gavin declares, fantasising about a night of elation at a gay club.

MUNA carves a space of total acceptance and thrilling adventure, traversing a sparkling cosmos of pop. ‘Runner’s High’ opens up a bubbling electronic landscape as sounds shift like tectonic plates; synths shudder in the manner of small earthquakes, and the end of the chorus sweeps in like an eruption, with drums pounding and pulling back. Buzzing with a kind of trapped energy, the track delicately balances urgency and hesitation: “Didn’t stay for the fight,” Gavin sings, “Honey you should see me fly.” Such earnest self-examination is notable also in ‘Kind of Girl’, an early single steeped in Americana; Gavin’s vocals take on a country twang as she proclaims, “I’m not some kind of minor trope/ Who’s never gonna change,” adding, as if as an afterthought, “That’s so/ Derivative.” Violins steal in and reinforce this lyrical sincerity, quivering behind slide guitar. Though production can be sparse, this record never lacks depth.

‘Handle Me’ pushes MUNA’s lyrical skill further, playing with cliches of female physicality and appearance to create a softly subversive anthem. “Bend me back and send me flying,” sings Gavin in the second verse. “I’m not gonna break, I promise.” This kind of confidence soars in ‘No Idea,’ another ‘90s club track with energetic synths and irresistible bass which opens with the declaration: “She is not a scene on your movie set/ She is not a mirror in which you reflect/ Yeah, she is of material substance.” Even as they swing from delicate acoustic production to full-blown disco, MUNA’s boldness never wavers.

The end of the record sees no deterioration in either MUNA’s eloquence or sonic playfulness, and previous single ‘Anything But Me’ is the epitome of both. “You’re gonna say that I’m on a high horse,” Gavin drawls amid marching drums and gritty electric guitar. “I think that my horse is regular-sized.” Having waded through the murky depths of grief and uncertainty to finally seize upon self-assurance, MUNA finds independence rather than loneliness: “We’ve paid in pain/ Now we’ll keep the change/ The blame is for the birds,” Gavin reflects in airy falsetto in ‘Loose Garment’. Final track ‘Shooting Star’ shrugs off the weight of the past and dips into new love, wary of the danger of being “hung over the moon, stranded in space.” Country guitar creeps in again as synths and strings emerge and dissolve like light passing over water.

What becomes clear in this record is that, regardless of the route or the destination, MUNA are enjoying the ride. As if moving with the tides, their sound transforms throughout the project, but at its core is vibrant pop that grasps tirelessly at freedom. Perhaps it is not about returning home, but, as Bridgers declares in the closing track of her record Punisher, seeking “a new place to be from.” MUNA makes that place, wherever it is, seem undeniably inviting.