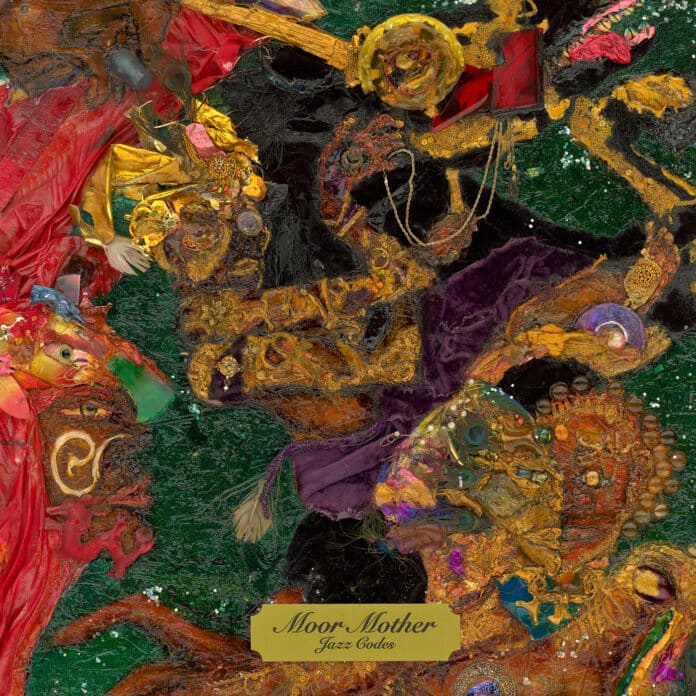 Throughout Moor Mother (aka Camae Ayewa)’s body of work, she wrestles with the ways dominant conceptions of history and temporality facilitate cycles of oppression. Her catalogue is prolific, including six vastly distinct albums from 2020 alone. Yet each new releases operates with no pulled punches: poetic assailments against the underpinnings of white supremacist narratives. Jazz Codes, her latest album, is a spiritual sequel to last year’s Black Encyclopedia of the Air. Both albums sprout from the theoretical underpinnings of Black Quantum Futurism: a multi-disciplinary project Moor Mother formed with Rasheedah Phillips, which aims to configure a new consciousness based around principles of communal healing, Black feminist liberation, and re-imaginings of both history and temporality. Aptly-titled, Jazz Codes explores the potential of jazz to undo normative aesthetic and social principles, imagining new histories and new futures.

The album is a shift away from the enveloping darkness often attributed to Moor Mother’s catalogue. This isn’t the bleak and furious free jazz of Moor Mother’s Circuit City, wading through the oppressive waters of hyper-corporate, neoliberal housing realities. Instead, Jazz Codes’ songs are breezier than even Black Encyclopedia’s, with more jazz and R&B-influenced production and melodic choruses. The album builds towards something both expansive and immediate. Jazz Codes is Moor Mother at her most optimistic and celebratory, beaming with warmth for her contemporaries, paying tribute to her past idols, and striving towards a radical new consciousness through music and poetry.

For Moor Mother, jazz isn’t a genre unified by fixed conventions. Rather, jazz is an overarching ideal: a Black tradition where instruments push the boundaries of musical convention into free-flowing experiments grounded in collaboration. Jazz Codes begins with Moor Mother’s spoken word murmuring over a hi-hat pattern, the occasional undercurrent of looming saxophone, and the gentle pluck of Mary Lattimore’s harp. It’s a jingly opener, exploring a space between genres which often becomes the album’s home. Jazz Codes’ emotional zenith arrives early with ‘APRIL 7th’. Jazz and ambient elements meld together. Warm drones and airy glitch sounds transition into a blaze of horns and distant rumbles of percussion. “It’s the baritone, the sweet lows/ And sweet chariots coming to take us home,” Moor Mother whispers over the gentle haze of sound. Jazz Codes carves a pathway towards liberation by invoking the fluidity of jazz and reveling in its misty contradictions.

The album is packed with features, highlighting an assortment of voices and musicians into a vast assemblage of stylings. Though Moor Mother’s voice remains a consistent central narration, Jazz Codes emphasizes collective discourse. Radical unities form through artistic collaboration. Moor Mother performs as a bard, guiding us in poem through a futuristic landscape of ruptured temporality. As an MC, the songs tend to align with the energy she offers as a vocalist. The album excels with Moor Mother’s most ferocious, lively verses, like ‘BARELY WOKE’, where she spits about the overwhelming anxieties of trying to fathom a liberated future while inhabiting a suffocating police state. Consistently, Jazz Codes finds Moor Mother experimenting with her voice. On ‘BLUES AWAY’, she tasks her vocals with conveying absolute anguish. Backgrounded by Faboi Sharif’s echoing shouts, Moor Mother navigates the song in a heartbroken moan. Her voice becomes a conduit for absolute loss.

Yet at other points, Moor Mother performs with considerable restraint. On ‘SO SWEET AMINA’, she speak-sings over two separate vocal tracks. The repetitive vocals unfold without the centrality often associated with a vocal line. Rather, Moor Mother’s voice becomes another instrument in the mix, swirling amidst the saxophone and bass. Jazz Codes carefully refutes the individuality of the singular musician, casting Moor Mother’s voice as one instrument amongst a larger orchestra, turning to jazz to bulldoze the structures of late-capitalism. Jazz Codes emphasizes the importance of collective unity in the face of an increasingly fascist state. Liberation, in the end, is never an individual pursuit.