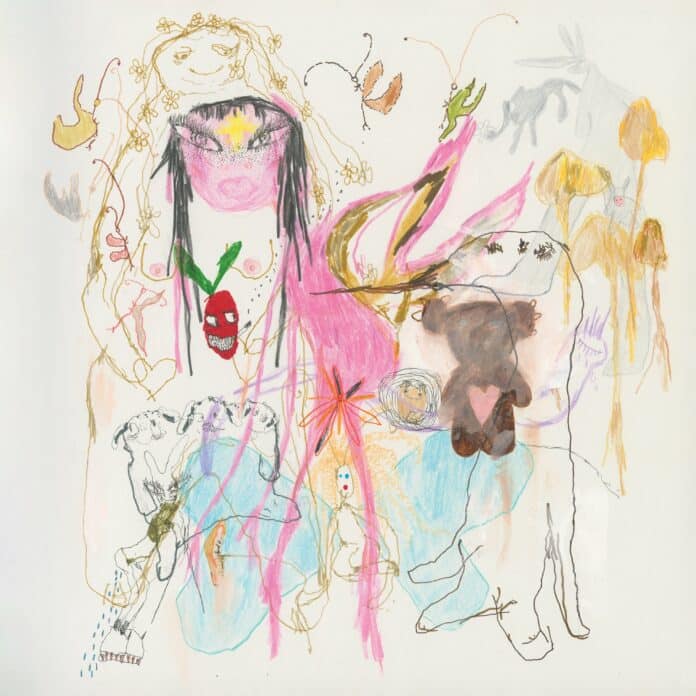 When Bea Kristi was seven years old, she escaped into an imaginary world called Beatopia. She found comfort in the characters and places she had dreamed up, but one day her teacher found and displayed her carefully mapped-out vision on the wall so that the whole class would mock her. It was four years after she had immigrated with her parents from the Philippines to London, and she already felt ostracized at her majority-white school. Now, following the success of her debut LP Fake It Flowers, she has decided to name her second album Beatopia, though it’s unclear what, if anything, has remained of the fantasy land, and how much has faded away with time.

At first glance, it’s also hard to tell exactly how it relates to the songs on the album, which is far from a concept record and only faintly touches on the theme of childhood. But sit with it for a while and the connection starts to become palpable, though still open to interpretation. Beatopia is a playful, subtly expansive album about digging through versions of yourself both past and present, real and projected, and deriving confidence from what feels true in the moment. Although it’s just as accessible and enjoyable as her debut, which itself felt somewhat disjointed, Beatopia stores undefined emotions in amorphous shapes without losing its immediate appeal, treating those bits and pieces as essential and building a world around them. beabadoobee is making a statement by putting it out for the world to consume, but part of the joy of self-discovery remains hidden, making some kind of sense only to the person experiencing it.

The thing about Beatopia is that you don’t have to relate to it or understand its reference points in order to appreciate its charm. As much as Kristi might be drawing inspiration from childhood imagination, the world she carves out here is much more reflective of her personal growth than an attempt to forcefully recreate it. Her mind retreats elsewhere, away from the past: ‘See You Soon’ is supposed to mirror a therapeutic mushroom trip – “this album might as well be called weed and shrooms tbh,” she said in a since-deleted tweet – and the disorienting euphoria of its chorus captures a fleeting but potent realization. Unlike other young writers, Kirsti doesn’t try to sell an obvious message – a lot of the album is about her making circles in her head, coping with the burden of aloneness. “I have this thing where I can’t really be by myself,” she admits on ’10:36′, where both the lyrics and the instrumental are split between a natural warmth and bracing vulnerability.

beabadoobee is an expert at hiding disarming truths underneath infectious hooks and shiny melodies, but she tries less hard to adhere to a recognizable set of ’90s influences in the way that its predecessor did. ‘Don’t get the deal’, one of the album’s most dynamic cuts, slowly gains momentum as Kirsti duets with her guitarist Jacob Bugden, a co-writer on nearly every track on Beatopia; its frenetic climax, complete with a fiery guitar solo, doesn’t offer catharsis so much as a path to another uncomfortable realization: “I needed some time alone/ To see that it hurts.” It’s only on highlight ‘Talk’ that beabadoobee leans on the familiar nostalgia and directness of Fake It Flowers, allowing herself a moment to sing about superficial pleasures and executing it memorably enough to justify its inclusion on this album.

It’s no coincidence that one of the most compelling songs on Beatopia is a duet. As much as there are aspects of the project whose meaning will always remain private, Kristi also opens up a space for collaboration, letting other voices inform a vision that might have otherwise apppeared too insular to be inviting. PinkPantheress harmonizes with her on ‘tinkerbell is overrated’, probably the song most inspired by the alienation of lockdown, where she can’t help but anthropomorphize a spider living in her bedroom. Georgia Ellery of Black Country, New Road and Jockstrap contributes string arrangements that add a touch of cinematic whimsy to songs that are mostly introspective. It’s clear when The 1975’s Matty Healy is behind some of the writing she latches on to, but it doesn’t make a song like ‘You’re here that’s the thing’ feel any less genuine. Beatopia is the rare sophomore album that doesn’t reach for authenticity by making the process more solitary or self-indulgent, but by allowing its natural contradictions to come into focus; the insecurities that never quite dissipate, the perpetual confusion. As she muses with a friend on the opening track, “Time is moving slowly.” But it does move. “I’m sure now, the people would listen as the water glistens,” she sings with almost surprising intimacy on ‘Ripples’, “And I see my reflection, somewhat clear.”

Album Review: beabadoobee, 'Beatopia'When Bea Kristi was seven years old, she escaped into an imaginary world called Beatopia. She found comfort in the characters and places she had dreamed up, but one day her teacher found and displayed her carefully mapped-out vision on the wall so that...