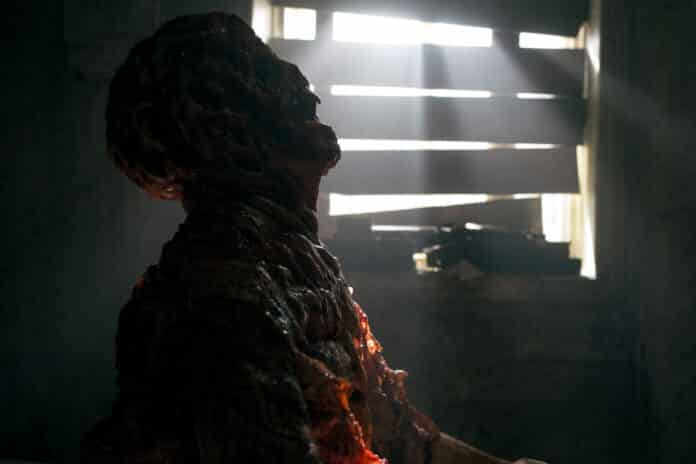 The Breach is the second film by Rodrigo Gudiño, founder and president of Rue Morgue magazine. Back in 2012, Gudiño made his filmmaking debut with The Last Will and Testament of Rosalind Leigh: a quietly haunting meditation on family ties and Catholic guilt that follows a grieving son as he is stalked by a shadowy presence lurking in the labyrinth home that once belonged to his recently deceased mother. It has taken a full decade for Gudiño to make his sophomore feature, a Lovecraftian police procedural that offers plenty to enjoy – but never quite lives up to its predecessor. Our Culture reviews the film here as part of its selection from the 2022 Fantasia International Film Festival.

Based on Nick Cutter’s Audible Original of the same name, The Breach follows John Hawkins (Allan Hawco), a small-town cop soon to leave for the big city. But before he can put rural life in Lone Crow behind him, he has one last case to crack: a horribly disfigured body (with no bones and extra fingers) has washed up on the shore of the Porcupine River. The body is assumed to be physicist Dr Cole Parsons (Adam Kenneth Wilson), who recently took up residence in a crumbling house hidden deep in the forest that is only accessible by boat. Accompanied by local coroner Jacob Redgrave (Wesley French) and charter-boat captain Meg Fulbright (Emily Alatalo), Hawkins sets out for the isolated building in the hope of finding answers. Instead, he finds a strange machine in the attic from which all manner of cosmic horrors are soon to be unleashed.

As that synopsis suggests, one of the most interesting things about Gudiño’s second feature is its genre hybridity. Like many Lovecraftian horror films, it is perhaps best described as a blend of horror and science fiction – but it is also by turns a police procedural, a murder mystery and a siege thriller. These varied genre elements make The Breach feel refreshingly novel at its outset, and its focus on an ordinary cop forced to contend with truly extraordinary events plays like a tribute to the films of Larry Cohen. But a less welcome familiarity begins to creep in as the narrative progresses into its second act, where the film inevitably comes to recall any number of other movies that draw inspiration from Lovecraft such as From Beyond (1986), Prince of Darkness (1987), The Void (2016), Annihilation (2018), Color Out of Space (2019) and even The Incredible Melting Man (1977).

So the screenplay – penned by Ian Weir and Cutter himself – is a little too derivative, and there are some further flaws in the writing. The film is heavy on superfluous explanatory dialogue, which is somewhat ironic for two reasons. First, The Breach’s obvious evocations of films like From Beyond and Prince of Darkness will mean that genre-literate viewers will already have a rough idea of how the plot will unfold. Second, it never fully reveals its secrets anyway, leaving several questions unanswered at its conclusion. This ambiguity is thought-provoking and preferable to a neat ending designed to tie up loose ends, but renders some of the earlier exposition a little needless.

Another problem arising from the screenplay is a lack of thematic or subtextual heft. Many of the characters here have some kind of inner conflict or motivation, but none of them build to a satisfactory conclusion. Really, the message at the centre of The Breach is one common to all ‘mad scientist’ movies: that humankind shouldn’t meddle with things it doesn’t fully understand. It’s an evergreen theme (and here related to a thoroughly modern scientific invention), but one that feels a little empty in the twenty-first century without some fresher subtext to support it.

With all that said, though, there’s plenty to enjoy here. Cinematographer Eric Oh gives the film a distinct visual style, and particularly intriguing is the lighting used for scenes set in the attic that houses the mysterious machine at the centre of the narrative. The room is bathed in pale pinks and soft greens that emanate from the contraption and its control terminal, bathing the frame in tones reminiscent of the primitive Technicolor process used for horror films in the early 1930s – including one of the earliest mad scientist movies, Warner’s Doctor X (1932). It’s a clever homage to the horror of decades past.

And the film is certainly committed to a pleasingly retro style in its extensive use of practical effects work. Paying tribute to the likes of Rick Baker, Rob Bottin, Tom Savini, Chris Walas, Stan Winston and other special-effects pioneers of the 1970s and 1980s, Daniel Baker’s prosthetic and creature effects fill The Breach’s third act with truly disgusting, gooey imagery that will delight any fan of classic body-horror. As long as they have patience, that is; the film’s more visceral genre thrills take a while to arrive, but they are more than worth the wait. And when the screen is filled with face-melting practical effects, it’s thankfully quite easy to forgive that The Breach never quite delivers on the promise of Gudiño’s debut.

Fantasia 2022 Review: The Breach (2022)The Breach is the second film by Rodrigo Gudiño, founder and president of Rue Morgue magazine. Back in 2012, Gudiño made his filmmaking debut with The Last Will and Testament of Rosalind Leigh: a quietly haunting meditation on family ties and Catholic guilt that...