Frankie Cosmos have announced their next album: Inner World Peace arrives on October 21 via Sub Pop. The follow-up to 2019’s Close It Quietly was produced by the band, Nate Mendelsohn, and Katie Von Schleicher at Figure 8 Recording in Brooklyn. Lead single ‘One Year Sad’ comes paired with a music video from director Eliza Lu Doyle. Check it out below, along with the album’s cover artwork (featuring illustrations by band member Lauren Martin) and tracklist.

“We conceived of the setting for the video as a cross between a diorama and an empty arena stage,” Eliza Lu Doyle explained in a statement. “To me, the interaction between Greta and the camera is almost like an act of faith—a reach toward an absent audience. We wanted to channel the pleasure of half-performing for that imaginary gaze.”

Band leader Greta Kline added: “This music video was created with my best friend Eliza, who makes video and performance art. It feels like an encapsulation of the record in that it’s strange and vast while also being contained and interior. Clowning and playing are a huge part of collaborating for me and Eliza. We wanted to perform a dance without dancing—the kind of movements you fall into in private, banal moments, playing without even realizing. Choreographing together felt like we were in sixth grade again, all id and giggles. The album and the video were made in these environments of love and pleasure.” 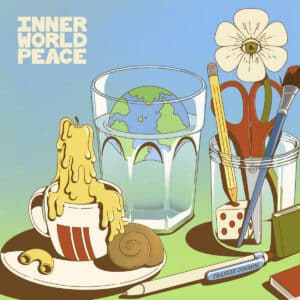