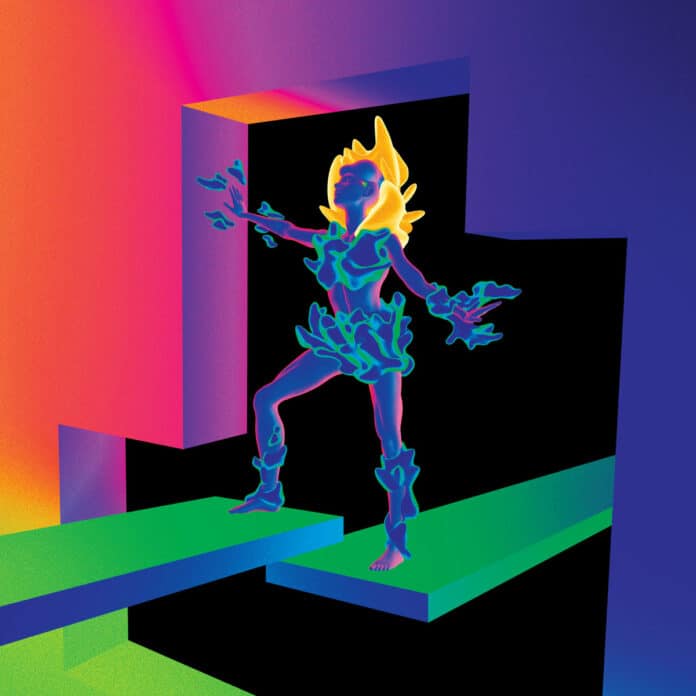 On Let’s Turn It Into Sound, modern synth maestro Kaitlyn Aurelia Smith returns with her most explosive project to-date. Off the heels of an excellent collaborative LP with Emile Mosseri, Smith crafts a hectic, experimental-pop album, equal parts frolicsome fun and investigation into the ontology of sound. Let’s Turn It Into Sound is a cross-modal inquiry, exploring how sound can embody non-sonic ideas and forms. It’s also incredibly goofy.

The album is a much livelier turn from Smith. Here, her textures move beyond the laidback, new age meditations of some earlier Smith albums like The Mosaic of Transformation. Instead, Let’s Turn It Into Sound leaps headfirst into a circus of glitchy drums and pulsating synths, all swirled together into a hyperactive assembly. Songs evolve like sketches stapled together. Discordant sounds collide, jumping to new platforms and scarcely cycling back around. Smith herself likens the album’s structure to a mimic of conversations, but this doesn’t quite encapsulate the spontaneity of the music. Let’s Turn It Into Sound’s primary pleasure stems from its ability to uproot expectations, building up a theme and then instantly dropping it for another one. It’s an impulsively structured album that, despite its synthetic palette, feels rooted in the structure of an organic consciousness, complete with all the whims and diversions of a human mind.

‘Have You Felt Lately?’, the album opener, begins with an upbeat stampede of ascending and descending keyboard melodies: imagine a TV morning news intro jingle played over a dozen hideously malfunctioning and out-of-sync screens. Then, after an explosive ten seconds, everything quickly fades out, replaced by several tracks of Smith’s voice. Throughout the album, her hyper-processed vocals stutter with sharp pitch jumps, layered into a disorienting choral effect. Admittedly, her repeated vocal processing technique – rampant across the album – feels somewhat redundant amidst the otherwise fast-shifting landscape of the songs. Smith effectively bridges the gap between the human voice and the electronic keyboard, adapting her vocals into a synthetic landscape. Yet, whereas her arsenal of synths flaunt a diverse range of palettes, her voice remains overly grounded in one sound throughout the album.

Smith’s most notable switch-up arrives halfway through ‘Check Your Translation’. The song opens with an ethereal synth-and-drum ballet. Then, after thirty seconds, everything changes with the suddenness of a switched radio station. Now, we find ourselves amidst a peaceful ambient landscape. Gentle pads simmer against a slow arp. It’s airy and meditative: a caesura in an otherwise gleefully energetic album. Yet as soon as this new, tranquil zone grows familiar, Smith pulls out the rug, jumping to a stretch of Nintendo-esque retro synths which seem extracted from the soundtrack of an early Super Mario game. Here, Smith’s switch-ups find humour in subverting expectations. The album takes immense pleasure in introducing forms which would otherwise never meet and bulldozing conceptions of which musical conventions can co-exist. For Smith, there’s no rulebook and genre is never something to strictly abide by.

Despite its mismatched body, Let’s Turn It Into Sound is a coherent work. Smith finds an underlying unity between her sounds through a universal indescribability. She once again proves herself a master of conjuring unique palettes, congregating like a broadcast of alien chimes. Because of how abstract Smith’s sounds are, they act as provocative stand-ins for non-auditory sensory experiences. This is an album that sounds like color and texture. Let’s Turn It Into Sound explores the complexities of our bodies and the ways art can facilitate a transfer across our neural networks. Smith, always ambitious, showcases art’s capacity to re-write the very ways we perceive the world.

Album Review: Kaitlyn Aurelia Smith, ‘Let’s Turn It Into Sound’On Let’s Turn It Into Sound, modern synth maestro Kaitlyn Aurelia Smith returns with her most explosive project to-date. Off the heels of an excellent collaborative LP with Emile Mosseri, Smith crafts a hectic, experimental-pop album, equal parts frolicsome fun and investigation into the...