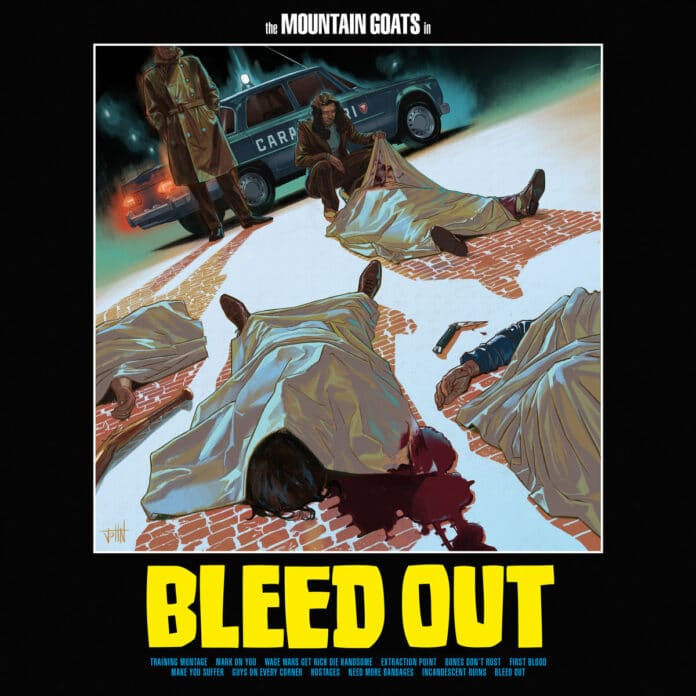 By the end of the opening track on the Mountain Goats’ 20th album Bleed Out, there’s no mistaking that the record is far more rock-infused than its 2021 predecessor – you can practically hear the crowd screaming along to the anthemic chorus: “I’m doing this for revenge!” Drawing inspiration from old action films, whether Stallone or Van Damme, the punchy, unconstrained project invites the listener on a cinematic journey propelled by electric guitar. This time, the Mountain Goats zero in on a ruthless thirst for vengeance.

Even with this distinct thread uniting the record, primary member John Darnielle and his bandmates venture into stylistically diverse territory beyond its rocky core. ‘Incandescent Ruins’, the ‘odd one out’ given its sci-fi setting, embraces a simple country-style strum as it dissects a simulation the protagonist finds themselves in, using clever cinematographic metaphors: “You only see the jump cuts and the close-ups/ You never get the aerial view.” The wonderfully jazzy tones of closing track ‘Bleed Out’, kindled by soft piano and slow-tempo drums – granted, at times a somniferous combination – also come as a pleasant surprise, evoking an image of rolling credits in a dark auditorium. With these exploratory flourishes in mind, the sound of the record remains notably focused, reflected in the limited number of creators behind the project, namely, the core members of the Mountain Goats alongside guitarist Alicia Bognanno. The overarching instrumental trends that accompany the relative straightforwardness of the lyrics, then, make the album an easy listen.

As is always the case with the Mountain Goats, though, things are never as simple as they appear. The subtle genre-blending and considerably varying lengths of the tracks reflect the complexity of the album’s lyrical scope: the anti-hero’s undying urge to exact revenge is at once mocked and used as a reflective tool on the audience. Darnielle has admitted that he appreciates action films that make him “feel uncomfortable with the moral ground that the movie is on,” and the record itself elicits such a reaction to a degree. Sure, this impulse to seek payback for wrongdoings, expressed especially gruesomely in ‘Mark On You’, is portrayed as inflated and comical, and yet, the whole album is also an unapologetic celebration of all that we hate to feel but feel regardless, be that jealousy, hostility, or a burning desire to get even. Unlike the central characters of Bleed Out, however, we are able to recognize that emotions can at once be irrepressible and still ultimately futile, and even laugh at ourselves when the heat settles.

The band frequently incorporates exaggeration and irony, making the listener confront the paradoxical nature underpinning many of the genre’s films; the 7th track in particular is teeming with mockery. The gentle shuffle and euphonic hook combined with the pleasantly self-motivational first verse almost have the listener fooled until the jack-in-the-box chorus hits, with Darnielle chanting “I’m gonna make you suffer” in the very same soft, borderline joyful tone of voice. The most refreshing track on the album, ‘Guys on Every Corner’, adds to this comically macho caricature of a man seeking to intimidate by flaunting his dangerous connections: “I’m coming to swat you down like flies/ ‘Cause I got guys/ Guys on every corner.”

‘Extraction Point’ reveals how, even during the more forgettable tracks marked by instrumental sections that feel slightly too drawn out, the lyrics still encourage a moment of personal contemplation far beyond the exciting thematic universe. “The angles you don’t plan for, the things you might have missed/ Those things exist,” sings Darnielle on his tribute to the band Silkworm, with the compelling effect of the lines enhanced by their final-syllable stresses. The quiet harmonies are comforting, and yet the mix of quick-paced percussion and dreamy saxophone leave the listener anticipating a climax that never quite arrives.

One of the most brilliant moments of the album occurs during ‘Hostages’ – one of the band’s longest songs to date – and demonstrates what could’ve pushed the whole record to an even higher niveau. The sore panic in Darnielle’s shaky voice as he cries out the ultimate “We may run out of bullets, we’re never gonna run out of hostages” with full conviction brazenly wakes the listener up, urging them to craft their own interpretation. If there’s an element the project lacks, it’s more of these stirring moments: the surprisingly big waves after hours of predictable ripples, the ones that truly leave a mark on you.

Album Review: The Mountain Goats, 'Bleed Out'By the end of the opening track on the Mountain Goats’ 20th album Bleed Out, there’s no mistaking that the record is far more rock-infused than its 2021 predecessor – you can practically hear the crowd screaming along to the anthemic chorus: "I’m doing...