Björk has revealed that Fossora, her first album in five years, will come out on September 30. She’s also shared the LP’s cover artwork, which was shot by Viðar Logi, with creative direction from Björk and James Merry. Take a look below.

In a statement about the new album, Björk wrote:

Last week, Björk announced that she will be discussing each of her 10 albums on a new podcast called Sonic Symbolism. Of Fossora‘s cover art, she said: “When I get asked about the differences of the music of my albums, I find it quickest to use visual short cuts. That’s kind of why my album covers are almost like homemade tarot cards. The image on the front might seem like just a visual moment, but for me it is simply describing the sound of it.” 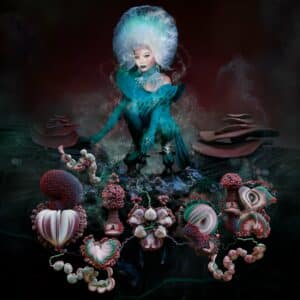