Paramore Announce New Album ‘This Is Why’, Share Video for New Single

Paramore have announced their next album: This Is Why arrives February 10 via Atlantic. It’s led by the title track, which is out today alongside a video directed by Turnstile’s Brendan Yates and shot in Malibu, California. Check it out below and scroll down for the album’s cover artwork (by Zachary Gray).

“’This Is Why’ was the very last song we wrote for the album. To be honest, I was so tired of writing lyrics but Taylor convinced Zac and I both that we should work on this last idea. What came out of it was the title track for the whole album,” Hayley Williams explained in a statement. “It summarizes the plethora of ridiculous emotions, the rollercoaster of being alive in 2022, having survived even just the last 3 or 4 years. You’d think after a global pandemic of fucking biblical proportions and the impending doom of a dying planet, that humans would have found it deep within themselves to be kinder or more empathetic or something.”

“It was so rad working with Brendan,” Williams added. “I’ve known the Turnstile guys for a little while and was so psyched to have our worlds collide in this way. There’s a cool kinship between the way our bands do things… Hopefully we will get to play shows with them at some point.”

Speaking about the new record in an interview with Apple Music 1’s Zane Lowe, Williams said:

I think that’s what was so exciting about any type of influence that we’ve grown up with, which I think is probably a bit more wide span than some fans would even realize, just because of the scene that we ended up being such a big part of. We were able to really lean into some of those earliest influences where a lot of electro clash and stuff that had a lot of groove, but it was really aggressive. I don’t know, I love Dev Hynes’ journey because he was in Test Icicles, and then you listen to what he’s doing now and all the artists that he’s worked with. And that’s the kind of artist that we want to be considered as. Zac plays some of his most aggressive stuff on this record and it was so… I was freaking out to be watching it in the studio because we hadn’t seen it in a minute. And yet, like you said, there’s some beautiful restraint that I think shows up in all of us in different parts that really allows other things to speak. And yeah, it was just such a cool… This was such a cool experiment, really.

This Is Why was recorded with longtime collaborator Carlos de la Garza, who worked on the band’s self-titled LP and 2017’s After Laughter.

This Is Why Cover Artwork: 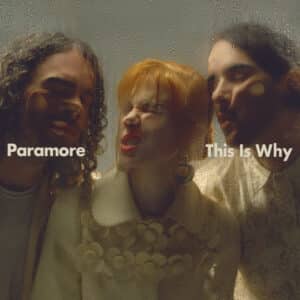