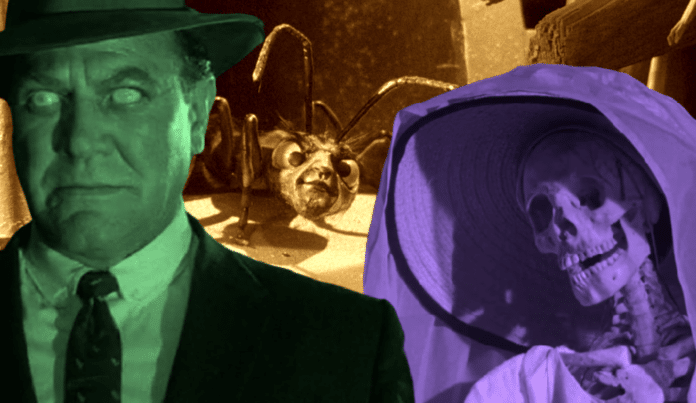 This time last year, I recommended five horror films for your Halloween line-up. Suffice to say, I’m at it again. For 2022, I’m pulling from television as well as cinema to mix up the list and to provide some perhaps unfamiliar monster gems. So, from ghostly adaptations to backwoods cryptids, here are five more horrors for Halloween.

In March 1957, Allied Artists released a Roger Corman double bill: Attack of the Crab Monsters and Not of this Earth. The former is a wildly entertaining creature feature in which irradiated crabs eat people to consume their consciousness. The latter is our focus, an intriguing alien visitor narrative that uses its budgetary constraints to great effect.

Paul Birch plays an alien whose race is afflicted with a fatal disease, victims of a terrible atomic war. He’s on Earth seeking human blood, hoping to cure his people. Under the guise of a “Mr. Johnson”, he hires a nurse (Beverly Garland) to look after him while goes about his mission. Immediately, there are some similarities with Toho’s The Mysterians (1957), which also sees aliens exploiting humanity following a nuclear war that’s ravaged their biology. But whereas Toho’s film has the benefit of colour, high production values, spectacular special effects, and an international scope, Not of this Earth makes do with a smaller, domestic sphere. Yes, it’s often flatly composed and there’s little in the way of action, but the ideas are framed well by the setting.

There’s a particular moment in which another of Johnson’s race meets him. The pair discuss their planet’s grim situation while flicking through pages at a magazine stand. The fate of an entire species, an entire planet, communicated in such a trivial setting. It’s fascinating.

Of course, I’d be a fool not to mention the marvellous Beverly Garland. Genre fans will recognise her from another Roger Corman science fiction picture, It Conquered the World (1956), as well as the cinemascope creature feature, The Alligator People (1959). Unsurprisingly, she’s wonderful and sells the story.

The sad state of this film on home video – and its appearance on Mystery Science Theater 3000 – has severely hurt its reputation. Released by American International Pictures in 1958, The Screaming Skull is an entertaining ghost story that’s much better than what you may have heard.

Eric (John Hudson) and Jenni (Peggy Webber) are newlyweds arriving to their new home – the home where Eric lived with his now-deceased former wife, Marion. The house – a monster of a building – oozes menace and discomfort, and it’s not long before Jenni believes she’s haunted by Marion. However, Eric’s past is far from spotless, and what initially seems to be a faked haunting designed to drive a poor woman to her death becomes something much more sinister.

From its fabulous poster art to its terrific title, The Screaming Skull is a picture that truly reaches its climax in shocking horror – as promised by its sensational opening narration. Several scenes of Jenni all alone in the house are very effective; Peggy Webber’s frightened look sells the horror as she listens to footsteps outside her door. If you can, track down Scream Factory’s recent blu-ray release to see the film in the best picture quality possible. Leave the MST3K quips behind and sink into what is often a very atmospheric and unsettling ghost story.

The film also features Mozart’s famous Dies Irae melody, oft associated with horror cinema thanks to Wendy Carlos and Rachel Elkind’s unforgettable rendition for The Shining (1980). Along with The Return of Dracula (also 1958), The Screaming Skull effectively uses the piece to set the right tone for its ghastly delights. Mention should also be given to cinematographer Floyd Crosby, whose photography of the film’s house serves as a forerunner to his work on the gothic mansions in several of Roger Corman’s Edgar Allen Poe adaptations.

One of its most memorable episodes is undoubtedly The Zanti Misfits. In the middle of a deserted town, the US military awaits the arrival of a spacecraft. Inside it are the titular Zanti misfits, criminals of an alien species sent to their new penal colony: Earth. Meanwhile, Bruce Dern and Olive Deering play two bank robbers who’ve unknowingly driven into the landing site. When the pair find and the Zanti spaceship before the military, the Zanti misfits are soon loose and on the rampage.

The episode raises interesting questions about carceral justice. As its opening narration asks, “what is society to do with those members who are a threat to society, those malcontents and misfits whose behaviour undermines and destroys the foundations of civilization?”. Within this discussion, Earth (read: America) becomes a colonial outpost, a place for the Zantis to expel their criminals in return for their technology. Placing America as the exploited party in an unfair exchange cleverly evokes and subverts contemporary (and ongoing) US foreign policy.

Of course, the real stars are the Zantis themselves. Their design is brilliantly horrifying: ant-like creatures with horrible humanoid faces, their expressions contorted into revolting grins. Their image has unsurprisingly become one of the series’ most enduring. So, sit back, ask yourself some difficult questions, and enjoy one of The Outer Limits’ best episodes.

In all honesty, there are too many Clark adaptations to suggest – A Warning to the Curious (1972), Lost Hearts (1973), The Treasure of Abbot Thomas (1974), etc. Almost all are masterclasses in the macabre, perfectly capturing James’ written language and imagining it for a new medium. However, for its sheer unpleasantness and deliciously grotesque ideas, I must recommend The Ash Tree.

Sir Richard (Edward Petherbridge) inherits his deceased uncle’s manor in the country. In its grounds stands an ash tree; its hollow interior hides the cruel past of Sir Richard’s uncle, Sir Mathew (also played by Petherbridge). In his time, Sir Mathew was a sheriff, and had sentenced a woman, Mrs. Mothersole (Barbara Ewing), to death for witchcraft. She, however, ensured that something of hers survived. “Mine shall inherit”, she cries before her execution. And from this promise, something crawls in through Sir Mathew’s bedroom window – or rather, some things. Small creatures with many legs, that wail like babies, whose withered faces are distinctly human. Much like the grim-faced monstrosities of The Zanti Misfits, the children of The Ash Tree are wonderfully frightening. They prompt revulsion and sorrow in equal measure, the terrible offspring of a doomed woman and an awful act of cruelty.

Though it loses some of the more disturbing details of James’ original tale (including an unnerving moment in which a cat falls into the tree), Clark’s adaptation captures its horror with precision. In particular, the few but significant interactions between Sir Mathew and Mrs. Mothersole are skin-crawlingly effective. Petherbridge’s effete, aristocratic portrayal sells the hideousness of the witch trials superbly – a profoundly unserious man wielding deadly serious power. Barbara Ewing is marvellous as the convicted Mothersole, her silence and burning stare saying more than words ever could.

Check your windows before heading to bed.

Released four years after what is arguably the best Bigfoot movie ever made (1972’s The Legend of Boggy Creek), Creature from Black Lake captures much of the same charm and appeal of its predecessor. When I was a child, I caught bits and pieces of this film on the Horror Channel. Despite the poor-quality pan-and-scan print that was used, the few scenes I saw stuck with me.

Rives (John David Carson) and Pahoo (Dennis Fimble) are two anthropology students who’ve travelled from Chicago to the backwoods of Louisiana to find a Bigfoot-like creature. Most locals seem hesitant to discuss their encounters until Rives and Pahoo meet a family who’ve been repeatedly terrorised by the monster. This brings me to the scene I remember most from my childhood. In a chilling flashback, we learn how the family encountered the creature when changing a tire on a lonely stretch of road. The youngest of them, a toddler, wanders off into the brush and comes face-to-face with the titular creature – seldom seen on screen but felt with effective use of point-of-view shots.

The film has a leisurely pace but never loses its appeal thanks to the charisma of its leads. It’s fun spending time with them and their believable friendship. Of course, this makes it all the more frightening when the monster appears, and the climactic encounter is unrelenting. The film also showcases the Louisiana swamps with a similar visual flare to Boggy Creek (thanks to master cinematographer, Dean Cundey), inspiring wonder and unease in equal measure.

And so, my friends, that concludes my suggestions for your Halloween viewing. I hope they’ll make your own line-ups more fun, exciting, and frightening. I think they will thrill you. They may shock you; they might even horrify you. So, if any of you feel that you do not care to subject your nerves to such a strain, now is your chance to…well, I warned you…