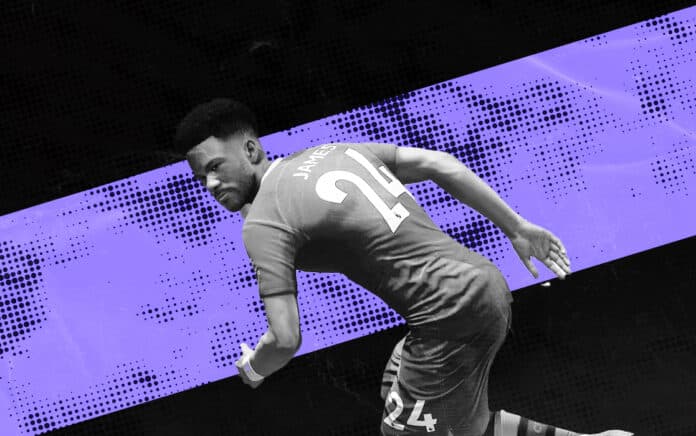 The quest for success in FIFA 23 career mode has never been more exciting. Yet, developing a well-rounded team that fits your tactical plans can be difficult. In this guide, we’ll look at some of the most exciting right-back and right-wing-back wonderkids and young footballer players in the game and examine how they can fit within your preferred formation.

Trent Alexander-Arnold is certainly no newbie to the spotlight, having won the Champions League with his career club, Liverpool, back in 2019 over the Premier League side Tottenham Hotspur. Likewise, Trent is well-established for Liverpool, having played over 168 games and scoring 11 goals. Internationally, Trent still has trouble getting selected on the regular due to the excellent players filling that position for England, like Kyle Walker and Reece James — to name a few.

When it comes to the game, Trent is a very well-rounded defender that starts with a robust overall rating of 87, making him a solid starter at any Champions League-level side. Potential is also pretty sweet for Trent as it’s set at 90, making him a world-class defender even in the eyes of his most prominent critics. The downside to Trent comes to those with a limited budget looking to build a solid team that doesn’t just excel in a single position but all over the field. The market value of Trent starts at €100.5 million, making him a pricey acquisition and only feasible to the top clubs in Europe.

Reece James is another superb defender in the right-back position for England. The 22-year-old currently plays for the London club Chelsea, though has been on loan to Wigan Athletic back in 2018 and 2019. Having made over 15 appearances for England, James is a close competitor for Trent in Southgate’s England side.

Potential-wise, James isn’t far from Trent, with a potential rating of 88. James has an overall rating of 84 and a market value of €57 million, which is nearly half of Trent, making him more suitable for mid-level teams across the Premier League, Bundesliga, La Liga, and Ligue 1. As a well-rated Premier League player, James has a real face scan within the game. It should be mentioned that James also has a release clause which you may want to pursue in the game. However, it will set you back €109.7 million.

Pedro Porro, the Sporting CP right-back and winger, is a solid player who is steadily becoming a force in his position, having made his first team appearance for the Spanish national team back in 2021. As a club player, Porro has made over 59 appearances for Sporting CP while on loan and being a full-club player.

In FIFA 23, Porro is quite an exciting player with solid movement stats that highlight in the sprint speed and acceleration departments, making him a solid for relatively fast-paced sides looking to break down their oppositions on the counterattack. With a transfer value of €38.5 million and an overall rating of 81, Porro certainly is an achievable acquisition for most decently rated sides in the game, even those not playing top 5 league football. Potential-wise is there Porro becomes so attractive with a potential rating of 87 — genuinely world-class level.

Frimpong of Bayer 04 Leverkusen is another player who has great potential in the game, and it’s reflected in his real-life performances. Frimpong started his youth career back in the respected Manchester City academy back in 2010 and stayed there until 2019 when he moved fully professional for the Scottish side Celtic. Frimpong made 36 appearances and scored three goals for the SPL club. In 2021, Frimpong signed for the Bundesliga side Bayer Leverkusen solidifying himself in the starting eleven ever since. Frimpong has currently made over 43 appearances and scored three goals for the German side. Internationally, Frimpong is still making his way to the senior team, having played for the U21, U20, and U19 Netherlands sides.

Game-wise, Frimpong has a few specialities, including being a speedster and acrobat. Indeed, when it comes to speed, he is much faster than the players mentioned above. Frimpong has an acceleration of 96 and a sprint speed of 93, making him a terrifying player when he goes on attack or when he is protecting his net defensively. Despite being rated at 86, Frimpong’s potential is a little low. With solid movement, skill and defensive stats, he certainly can become an embedded player within a top-tier team. If you’re a fan of players like Trippier, Carvajal, or Mendy — you’ll like Frimpong within your team.

The RB list of players within this list wouldn’t be valid without the Dutch rising star Timber, who currently plays for the Youth-driven Ajax. Timber is an excellent prospect within the world of football, having already made over 59 appearances for the first Ajax team and ten appearances for his national side. Timber has also won several awards, including a few individual ones, such as the Ajax Talent of the Year (Marco van Basten Award) back in the 2021-22 season.

As a player to sign within FIFA 23, Timber will be a suitable player for those looking for a player seriously driven on the defence rather than attack. With a finish of 41 and free-kick accuracy of 31, Timber won’t be scoring many goals for you. Nonetheless, Timber can play right-back and can favourably switch to the centre-back position. Within the game, he starts with a rating of 80 but can quickly reach his potential of 88. At a starting value of €44.5 million, Timber is a thrilling possibility for your ultimate career mode project.

With so many great right-backs coming through, it was difficult to make this list. So, we went a little sideways and found a hidden gem within a game — Juan José Mina. This Colombian youngster has played for Colombia’s U16 side and plays for Deportivo Cali. Within the game itself, Mina starts with a measly rating of 64, which doesn’t seem that attractive, especially when you can find a regen within a season or two with better ratings. Yet, the potential of 84 and a transfer value of around €1.5 million makes Mina a highly suitable player for League 1 sides in England and the lower league clubs across Europe that wants someone with great growth potential. Mina is an outstanding value-for-money player within a game.

The last player on this list of the best RBs in the game is Malo Gusto, the French player who currently plays in the right-back position for Olympique Lyonnais. As a pro, Gusto has made over 40 appearances for Lyon and has featured across several of the French Youth National teams, including France U21. Gusto is a highly-attacking defender, suitable for those German-like sides. As a player in FIFA, Gusto begins with a rating of 75 and has the potential to reach 85, putting him on the premium list of right-backs in the world. Gusto is an affordable player as his market value begins at €11.5 million.