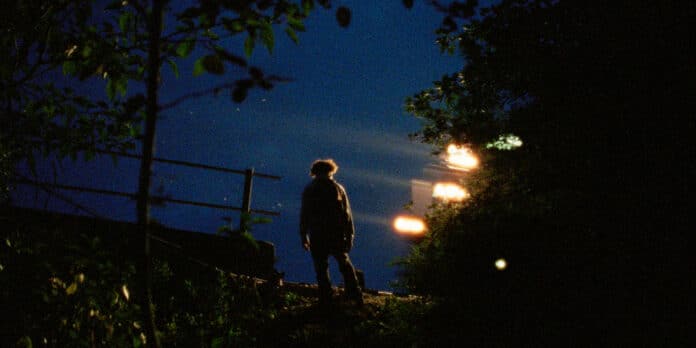 The Maiden, Graham Foy’s hypnotic feature debut, is an intimate fantasy about teenagers grappling with the limits of mortality. Set against Calgary high school halls, sunny backroads, and under graffitied bridges, the movie treats its quiet landmarks as gateways into the fantastical, where borders between life and death dissolve. Anchored by a trio of performances by non-professional teen actors, the movie fuses raw, documentary-like aesthetics with a meditative curiosity towards the sublime. It’s a tender séance, probing into afterlives and other worlds, and also an exciting first feature.

I spoke to Graham Foy about The Maiden, his hometown of Calgary, his two-year casting process, and some of the movies which helped him craft his representation of youth.

When did the idea to make a film about youth in Alberta come about?

I grew up in Alberta, specifically in Calgary. And so, I was really excited to make my first feature film about a place that I had a lot of history in and specifically spaces that brought back a lot of memories. It was really helpful to have personal material to draw from in the making of the script. It was also interesting as somebody who doesn’t live in Alberta anymore. The project was based on this idea of memory and how memories change as you get further away from them. I wanted to make something that was personal, but the film isn’t completely autobiographical. There are a lot of things that are embellished or made up. But it was helpful to have those pieces as a starting point.

The movie feels very familiar with its geography. Simple landmarks like a bridge or unfinished house are treated almost like spiritual epicenters. What specifically about Calgary and the ravines and backroads compels you?

I grew up in the suburbs that surround that ravine featured in the film. And the suburbs always felt very void of imagination and claustrophobic. There were always construction sites around. We lived at one of the furthest suburbs outside the city limits at the time. The ravine, the bridge, and that landscape were very magical to me as a kid. And there was a lot of mystery to it in comparison to some of the more built landscapes around me. I spent a lot of time down there as a kid. And with memory, as I get older, the place also transforms into a sort of liminal space in my mind. It’s also a place where a lot of people just walk their dogs, so it’s probably not this way for everybody. But it was a space of small transformations or pieces of magic to me as a kid.

And was the entire movie shot in Calgary?

Yeah, it was shot in Calgary and Cochrane, which is just outside of Calgary. But Cochrane’s slowly been being eaten by the city limits of Calgary. But it’s a separate municipality.

What interests you about teenage characters?

When I remember my own experience of being a teenager, there’s this sense of mystery towards the world or a sense of the unknown that I was really excited by. But I was also interested in the extreme emotions of being a teenager. I wanted to create a film that represented teenagers in as realistic a way as I could, in terms of performance, but also in terms of how the film represents a teenage experience psychologically. I wanted it to never look down on them, condescend, or treat them like cartoons. So I wanted to try to honour and learn from that teenage perspective as a slightly older person.

The trio of main actors give incredibly natural and unstrained performances. What was the casting process like?

We cast for about two years. My wife Daiva [Zalnieriunas], who is a co-producer on the film with Dan Montgomery, and I spent about two years doing workshops at high schools in and around Calgary. We also cast at skate parks and skate shops. It was a really rewarding process. We met a lot of amazing kids along the way who are also featured in the film in background roles, some of whom volunteered on the production. But it was a long process to try to find the three lead kids. But for each one, we knew almost instantly when we saw them that we wanted to cast them in the lead roles.

We did some acting workshops. A lot of the theatre programs in high school don’t do camera-specific acting training. So we offered some hour-long mini-lectures and Q&A sessions where we could explain our experiences working in film and acting in film.

Were you looking for actors who fit firmly established, pre-written characters? Or did the actors’ personalities re-orientate the characters you’d written?

The kids that we ended up casting were so specific, and they had such unique personalities that I really wanted to give them agency in the film to represent each character in a way that felt natural to them. I also wanted to salvage the words that they use in daily life and how they communicate to one another, instead of putting my words in their mouths. And so, I really tried to allow for flexibility and freedom within each scene while giving a really pointed direction for where the scene should go.

There’s a very sudden scene set in a shop class where a background character accidentally cuts off three fingers. For a moment, the perspective shifts away from any of the movie’s protagonists. Why did you want to move beyond Colton’s perspective there?

Between my conversations with a lot of kids and also the time that we’re living in, I was interested in creating a world where it feels as though bad things can happen at any time and in a casual way. That’s been my experience in the past. But I also feel that we’re living in a time with so many kinds of anxiety-inducing things externally in the world: pandemic, global warming, school shootings, and all these really loaded and heavy topics. I think there was something about creating a space that had this anxiety where something bad could happen in at any time, while also creating a peaceful bed for those experiences to sit at.

A lot of movies about teenagers are really focused on cultural markers of the characters’ era — things like popular music, technologies, etc. The Maiden generally sidesteps that and has a sense of timelessness though. Was that something you deliberately cultivated?

Yeah, I think so. I went to high school in the early 2000s. And so, I wasn’t that interested in creating a period piece. But I also recognized that my perspective was from a specific time, so I wanted to embrace what was here and now. So, there’s scenes where kids are on cell phones. That’s not something I wanted to exclude from the world. But I also didn’t want to be too specific about when, or even where, it was within the narrative of the film. So I don’t think Calgary is ever mentioned in the film itself, even though it’s a really important part. I was really inspired by the way that certain writers create stories or worlds that are based on a place, but then the place that the story lives in is kind of lifted above, or it’s some place slightly separate from that real place (or time).

For someone like me who’s never been to Calgary, it felt like the cowboy hats were the biggest geographical indicator.

Were you ever consciously thinking about The Maiden in the context of teen movie conventions while making it?

A little bit. I think there were certain things like the stoner circle scene. I thought there’s something funny about doing the kind of That 70s Show rotating camera trick but in a really slow, methodical way and in completely different contexts where it’s more anxiety-inducing than fun weed-smoking. But certainly, I think one of the films I was thinking about a lot was Frederick Wiseman’s High School and how we show the spaces and the kids who are in the high school. I really wanted to show the world that surrounded Colton as much as showing Colton’s experience within that world. But I guess I wasn’t thinking that much about more traditional high school films.

I can see the influence of Wiseman in the drifting and non-expository gaze. I’ve also seen a lot of people draw parallels between The Maiden’s representation of ghosts/other worlds, and that of Apichatpong Weerasethakul. Were his films on your mind at all?

Absolutely, yeah. I really love Apichatpong. It wasn’t a reference for the film specifically, but I think it’s made its way in there subliminally. Definitely a filmmaker I admire very much.

I also see a lot Gus Van Sant in there.

Yeah, Gus Van Sant’s collaborations with Harris Savides were something that me and Kelly Jeffrey, the cinematographer, talked about quite a bit in terms of how to represent spaces visually. But also the pacing of those films: Jerry, Elephant, and Last Days. We were inspired by the way that those worlds feel extremely naturalistic and the way that they’re lit or not lit primarily with natural lighting. But we also wanted to make sure that we broke away from that and tried to capture motion in a way that nodded to those projects but was also new for us as well.

It’s been years since I’ve seen it but Paranoid Park especially kept coming to mind when I watched your movie.

Yeah. [laughs] The skateboarding and stuff. That wasn’t an influence for us but I have seen that movie and I can see how there are parallels for sure.

Do you have any projects planned for the future you can talk about?

None that I can talk about, but definitely some new features projects in the works for sure.