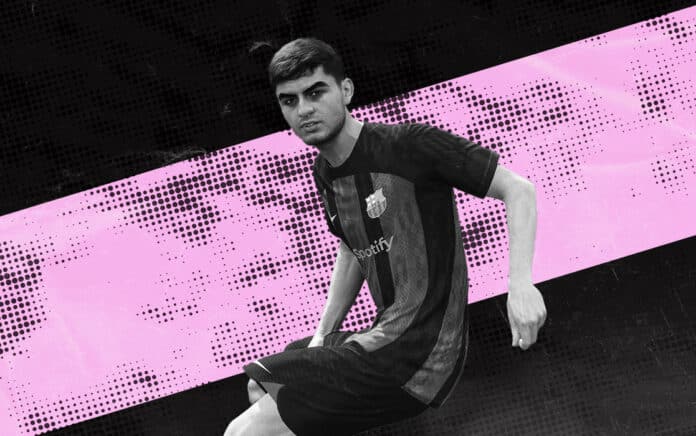 The centre of the pitch dictates a lot of things within a football game, including and arguably most vital, the pace of the game. They can make or break a team with their defensive choices and can hugely impact the final third of the pitch on the attack. In this short guide, we’ll look at some of the best FIFA 23 wonderkids in the central midfield position. We will include attacking midfielders and defensive ones for a broader range of tacticians in the game.

With over 60 appearances for Bayer Leverkusen, Wirtz is undoubtedly no stranger to top-tier European football. The 19-year-old also made four appearances for the German national team, where he made his debut in 2021 against Liechtenstein. Stylistically, he likes to be on the attack and can be played in CAM and CM positions — depending on your needs.

In terms of the game, Wirtz starts with a decent rating of 82 but can be quickly risen to 91, making him potentially a world-class player. Money-wise, Wirtz is valued at €66 million, though this would likely increase quickly if you don’t snap him up within the first season or two. If you’re looking to avoid negotiations, you can pay a release clause of €125.4 million for Wirtz.

Bayern Munich’s rising star Musiala is another player to add to your wishlist of centre-midfielders. Musiala, like Wirtz, is 19 and has already made over 65 appearances for the mighty Bayern. Musiala has also appeared for the senior German national team 17 times and has scored once against North Macedonia. With a quick rise to success, Musiala is certainly a player to keep an eye on.

Game-wise Musiala is a strong starter with an overall of 82, meaning he can be placed within most serious Champions League contenders starting 11. He can also reach an astounding 91 rating, meaning you could potentially have two world-beating German midfielders on your side if you sign both Musiala and Wirtz. In terms of money, Musiala also starts at €66 million transfer value but can be bought for a release clause of €122.1 million. Musiala as a player, has excellent dribbling skills with respectful movement attributes that make him a nightmare for opponents in the middle of the park. In addition, he has two special abilities: dribbler and acrobat.

Pedri is another superb player in the centre of midfield on our list of wonderkids to sign. As a 19-year-old, Pedri has also made 14 national team appearances for Spain since his debut against Greece in 2021. For Barcelona, Pedri has delivered 8 goals within 57 appearances. Among his early success, Pedri has added various individual awards to his cabinet, including the Golden Boy in 2021 and was selected as part of the UEFA Champions League Breakthrough XI in 2020.

In terms of the game, Pedri commences with an overall rating of 85 and a majestic-like potential of 92. This high rating means Pedri is not a cheap option or an option at all for most teams in FIFA. However, if you do have the money, you can try negotiating for him by spending just over €104 million. Otherwise, if money is no issue, you can skip the negotiation and pay the release clause fee of €235.1 million. In terms of specialities, Pedri possesses many, including dribbler, playmaker, engine, acrobat, and complete midfielder. Pedri’s overall attributes and potential make him a runner for the best in the world title.

With a similar style to that of Milan legend Andrea Pirlo, Tonali is undoubtedly a big part of the following Italian generation of footballers. Originally starting his career for Brescia back in 2017, Tonali flew into the football scene quite rapidly, being named a wonderkid by many footie fanatics in his final season for Brescia when they reached Seria A by promotion. Since his move to AC Milan, Tonali has impacted the team immensely and also took a pay cut to join his childhood team. Since playing on loan and being a full-time player for the team, Tonali has made over 44 appearances and has scored 5 goals. In terms of the Italian national team, Tonali appeared for the U19 and U21 sides regularly until 2019, when he was called up for the senior side and played his first game against Liechtenstein.

Game-wise, Tonali is exquisite with fantastic short and passing ability and equally complimenting movement and dribbling attributes. As a player, he is well-rounded and can be suitable for defensive and offensive formations. In any team that signs him, he will undoubtedly make an impact with an overall rating of 84 and a potential of 90. The transfer value of Tonali is €62.5 million, but he can be bought for more if you’re looking to break his release clause, which comes at €118.8 million. And as expected, he has a real face scan within the game.

There is a lot of hope for Alex Scott, the Englishman, who currently plays for Bristol City in the EFL Championship. The 19-year-old has already made over 40 appearances for the side in which he scored four goals. Internationally, there is still a long way to go for Scott. He currently plays for the England U19 and U20 sides, having made 15 appearances across the two National youth sides.

Scott is a relatively solid player for the EFL Championship level within the game, certainly a player any clever manager would be happy to wait for growth, especially knowing his potential is 87. This makes his market value quite low at €3.5 million and makes him an affordable proposition for many youth-minded managers in career mode. Those unsure about his impact should still buy him and loan him out until he grows into a more well-rounded player that can play at higher levels in the centre of the park.

Luka Romero is Lazio’s rising star in the Seria A. Having made only eight appearances, there are still many questions about his real-life potential, but the 17-year-old certainly is establishing himself as one to watch. Romero has currently made appearances for various Argentinian youth national sides, including the U20 side in 2022 when he played against the USA.

In FIFA 23, Romero is rated relatively to his age, experience and current ability at 67. While that rating may disappoint, his 86 potential indeed doesn’t — even the harshest critics can agree on that. His market value is also reasonable, coming in at €2.5 million. With a near guarantee that he will grow into a beast, investing in him early will pay great dividends to the believers in the youth.