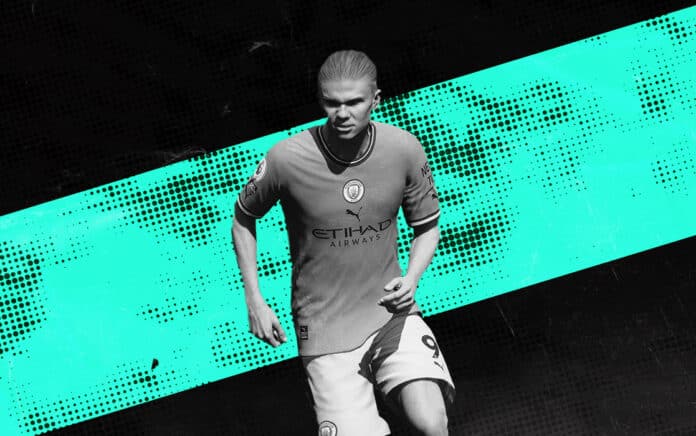 The goalscoring position is arguably the most important within the starting 11. Without any goals, you can’t win, and if you can’t win, then you’re probably going to lose or, at best, draw (which no one wants). In this guide, we’ll look at some of the most impressive young strikers in the game of FIFA 23. From well-known names to the underlooked, this list has it all.

Haaland is world-class — it’s that simple. At only 21, he is looking to break many records within the Premier League — having already scored 15 goals within nine games. And they said Bundesliga was the farmer’s league. Haaland first gained attention back in 2017 when he signed for Norwegian side Molde under Ole Gunnar Solskjær. He scored 14 goals in 39 games for the Norwegian team before moving to the Austrian Bundesliga in 2019. Upon his arrival at Red Bull Salzburg, there was a lot of hope for the youngster, who was also establishing himself within the Norway U18 and U19 sides, scoring plenty of goals for the national teams. At RB Salzburg, Haaland developed a sickness for scoring goals, managing to bag 17 in only 16 games — a truly majestic feat even in the Austrian Bundesliga. After such big success, it wasn’t long before others started to get interested in him. German Bundesliga’s youth-minded Borussia Dortmund signed the youngster €20 million. The club made a great decision as Haaland bagged 62 goals in only 67 games for the side, making him a great replacement for the Polish Lewandowski. Just two years after, Haaland moved again. This time to his childhood club, a club his dad played for in England — Manchester City. €60 million was the fee they paid for him. A minor price for such a talent nowadays. Haaland joined the English signed in May of 2022 and began playing for the club in the 2022-23 season, making a quick mark scoring 15 goals in nine games. Internationally, Haaland also has been succeeding in achieving 21 goals within only 23 games for the Norway national side. The current record for the most goals scored for the national team stands at only 33, set by Jørgen Juve. A player who played football over 100 years ago. Haaland looks not just to break that record but to eradicate it. Haaland currently averages 0.91 goals per game.

In terms of the game, Haaland is just as powerful and majestic as he is in real life. With an overall rating of 88, he is already world-class and has the potential to grow into a 94-rated striker. The rating which only the best in the world claim at the peak of their career. Regarding market value, he is estimated to cost around €148 million though Man City have set a release of €303.4 million (Yes, it is ridiculous). He has tonnes of great attributes that just make him hard to criticise. His lowest attribute that is somewhat important within his stat line is FK accuracy which comes at 62. Though, he doesn’t need it when he has players like De Bruyne in his team. Haaland also has many great player specialities, including aerial threat, distance shooter, strength, clinical finisher, and complete forward. So, if you’re truly building the best in the world team on your career mode save, Haaland must be in your squad.

While Pino can play the right-mid position, he can certainly and has been utilised as a striker. The 19-year-old currently plays for Villareal, a club which he joined in his youth career back in 2017 after playing for Las Palmas. Pino has made over 62 appearances for the main team and scored ten goals for the side. He has also played several games for the Spanish national team and has scored his first international goal against Iceland.

Game-wise, Pino is rated 79, which makes him a solid addition to any mid-table team in the Premier League, Bundesliga, or even La Liga. He is certainly shouldn’t be dismissed especially knowing that he has the potential to reach an overall rating of 87 — making him scary good. In terms of movement, Pino has solid stats, though he doesn’t compete against the likes of Mbappe or Haaland. Overall he is pretty well-rounded and has a market value of €38 million. If you’re looking to skip negotiations, then you can sign him by breaking the release clause, which comes at €87.4 million. Sadly, Pino does not have a real face within the game — a little surprising considering his status within the game.

Chukwuemeka of Chelsea has only played a single game for the side. At only 18, he has made over 13 appearances for the senior Aston Villa side before arriving in London. Internationally, he has also been selected and has contributed seven goals across the U18 and U19 England sides. While he is still early in his pro career, Chukwuemeka has certainly been put on the radar as one to watch and, in the summer of 2022, was selected as part of the UEFA European Under-19 Championship Team of the Tournament.

When it comes to the game, Chukwuemeka is rated low even for an 18-year-old. But, he has a phenomenal potential of 86, which can be acquired if you buy him quickly for around €1.9 million. Though a release clause of only €5.4 million is available. In terms of attributes, he doesn’t have anything outstanding yet but possesses the flair trait with 4-star skill moves.

Marko Lazetić is one of many marvellous young talents to come out of Serbia. Having played for Red Star Belgrade in his youth and made 15 appearances in his senior career for the side, in 2022, he moved to Seria A’s AC Milan, which he has made one appearance for. For Serbia, he has represented the U16 and U19 sides, scoring once for the U16 and five times for the U19 side.

Lazetić, like Chukwuemeka, is rated relatively low within the game (though age is part of the equation). At 65 rated, he can grow into a top-notch striker with a potential of 85. Money-wise, he comes at a transfer value of €2 million though he can be bought for €5.4 million under the release clause. Like other players on our lists, he has no real face scan within FIFA 23.