White Reaper have announced their next album, Asking for a Ride, with a Lance Bangs-directed music video for the new song ‘Pages’. The follow-up to 2019’s You Deserve Love drops January 27 via Elektra Entertainment. Check out ‘Pages’ below.

White Reaper recorded and largely self-produced the new LP in Nashville with assistance from engineer Jeremy Ferguson. Guitarist/vocalist Tony Esposito remarked in a statement: “We ask ourselves: ‘Does it sound good when we play it in the room together?’ And if it does, those are the songs we want to pursue.” Guitarist Hunter Thompson added, “We started to recognize how we operate best as a band.”

Commenting on the new single, Esposito said: “It seems like ‘Pages’ could’ve easily existed on one of our earlier records, it’s just a few chords and a simple melody; but because of that, I’d say that it’s pretty unique to the rest of our new album. We can’t wait to show everyone what we’ve been working on.”

Lance Bangs added: “White Reaper are a joy to make things with, 5 guys that are good company in recording studios, house parties, live shows, and anywhere else you can spend time among them. We had a great experience shooting saturated color motion picture film on handheld cameras for the ‘Real Long Time’ video for their previous album, and I wanted to get everyone together for an outdoor daylight look in one of my favorite architectural public spaces, the Keller Fountain in Portland Oregon. It was designed in the late 60s and opened to the public in 1970. It’s an enduring free space where people can spend time. We filmed on a bright, warm afternoon and conjured up a video that feels like the song: dynamic, catchy, genuine.”

Asking for a Ride Cover Artwork: 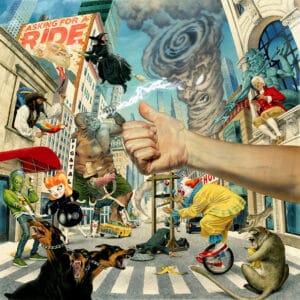 Asking for a Ride Tracklist: