Portrait of a Lady on Fire: A Heroic Tale On Womanism 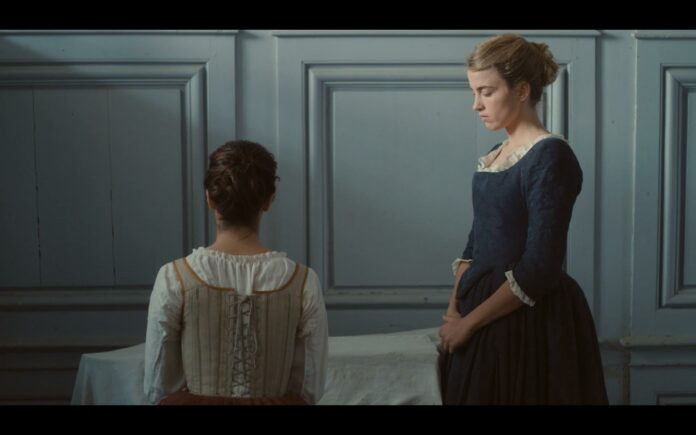 Women have been thwarted for years now. Some have fought through the test of time while others showed a blind eye to it and perceived it to be their destiny. This Portrait of a Lady on Fire review will showcase how women throughout history have battled a constant struggle for survival.

Céline Sciamma’s Portrait of a Lady on Fire is set in 18th century France and features two young women, Marianne as an artist and Héloïse as the subject of her latest commission. The mansion of the countess had called for her to draw a portrait of the countess’s daughter who was getting married.

The movie portrait of a lady unwinds as they find themselves slowly drawn into a romantic love affair—a brief love affair that is about to remain in their memories for the rest of their lives. A plot that talks about cherished love between two people while also showing us the condition of then France with an excruciating finesse.

This coming-of-age movie embodies the metamorphic power of love and how someone’s love can leave a lasting impression on your heart. It talks about how the duration or the depth of your love is not what matters but rather the strength that true love could bring into your life.

It was a time when there was systematic oppression of female painters. Marianne in the portrait of a lady on fire braved as a portrait artist during these times when male artists were abundant. It throws light into the multifarious identities that womanhood carries. It does so by moving away from dominant monologues about women in cinema.

There is a use of symbolism throughout Portrait of a Lady on Fire that gives us a wider perspective on the plot. Their love affair between Marriane and Héloïse in Portrait of a Lady on Fire is compared to the chaotic character of fire throughout the film. It develops a cosmic connection between the pair, demonstrating how both alluring and destructive their relationship could be.

There has been a conscious choice in the depiction of the female body that does not meet conventional standards of female beauty. In a particular scene, Marriane sits naked by the fire where her protruded belly is quite visible. The very scene shows us a woman who is not shameful of the fact that she does not have a flat belly.

The Portrait of a Lady on Fire explicitly defies the standards set for women of the time. In a time when women were merely even exposed to the outer world, Marianne fearlessly illustrated nude paintings of both sexes on her canvas.

The love tale between Héloïse and Marianne was warm and heart-wrenching at the same time. An art about love that goes beyond the standards set for women,  that shows how two women find freedom through love. Love that gives us a glimpse into the intimate feminine world, that holds harsh realities we might be unaware of.

Even without showing any male characters onscreen, Sciamma depicts the countless ways in which the patriarchy clenches the lives of her female protagonists. “Portrait of a Lady on Fire” is a movie about profound female solidarity. Sciamma makes a powerful statement by letting sisterhood bloom organically out of the setting’s forbidding traditionalism.