mui zyu, aka Eva Liu of the art-rock band Dama Scout, has announced her debut album: Rotten Bun for an Eggless Century comes out February 24, 2023 via Father/Daughter Records. Today, Liu has shared one song from the LP, ‘Ghost with a Peach Skin’, alongside an accompanying video directed by CLUMP Collective. Check it out and find the album cover and tracklist below.

“This song is about leaving your former self and entering your new peach skin,” Liu said of ‘Ghost with a Peach Skin’ in a press statement. “Peaches are considered a symbol of longevity and even immortality in Chinese culture. The protagonist has overcome enemies and has bruises to prove the damage. However the bruised peach becomes stronger by overcoming them. The song features guzheng samples that have been highly edited and mangled. We liked the idea of having an excellent musician improvise on the traditional Chinese zither and ‘bruising’ their performance with distortion and effects to create a new stronger sound with little of its former self present – much like the meaning of the song. The ‘ghost’ inside refers to the ghost we used to be, the ghosts we carry with us and the ghosts we have to overcome too.”

Of the video, Liu added: “I am eternally grateful to have met ‘Pickle’ the peach-dog who has taught me so much about the world. Working with the like-minded ensemble that is CLUMP has been a joy, they created this lost and found narrative of self discovery and an unusual bond that co-exists with the song magically.” CLUMP commented: “We loved the mix of dreamy and fun that is ‘Ghost With A Peach Skin’, and we were keen to make a video that reflected this. Our studio became cardboard hell for a couple weeks, the disconcerting Pickle was birthed, and we kidnapped Eva and Lucci from London for the weekend. We’re so proud of the heartwarming tale of platonic love between woman and peach-dog that emerged.” 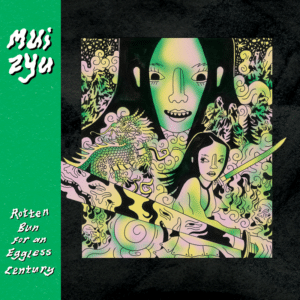